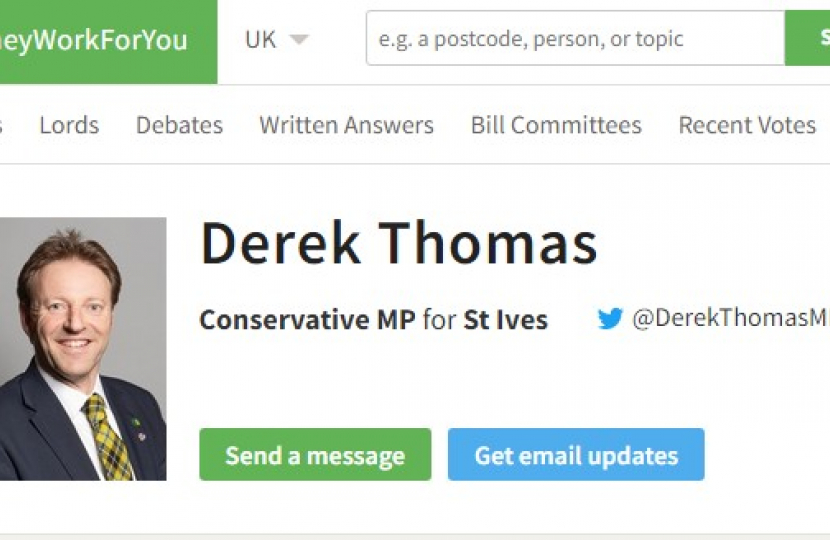 I welcomed the website TheyWorkForYou when it was originally set up – our Parliamentary system is notoriously opaque, and anything that aids public understanding will improve democratic accountability.

Some of its tools are genuinely useful.  If you want to find out about my financial interests, you can see them all on this page, rather than trawling through the Register of Members’ Interests for each Parliamentary year.

For as long as TheyWorkForYou was simply presenting information in a user-friendly way, it was a boon.

When they went beyond this, and tried to summarise MPs’ voting records, they had to make political judgements about what these records mean – and their judgements are fundamentally flawed.

For example, the website says that I have “consistently voted against measures to prevent climate change”.

It says that Alex Chalk MP, recipient of the Climate Commission’s Climate Champion award after tabling the Climate Change Bill, setting the 2050 target for Net Zero which the government adopted, “consistently voted against measures to prevent climate change”.

It says that Simon Clark MP, winner of the Climate Coalition’s Green Heart Hero Award after he co-ordinated the cross-party push to legislate for Net Zero, “consistently voted against measures to prevent climate change.”

BUT it says that Graham Stringer MP “voted a mixture of for and against measures to prevent climate change”.  Graham Stringer is a trustee of the Global Warming Policy Foundation, a lobbying group which campaigns against Net Zero.  He was one of only two MPs to vote against the Energy and Climate Change Committee’s acceptance of the UN IPCC’s conclusion that humans are the dominant cause of global warming.

If you believe TheyWorkForYou, a climate-change denier has a better record on climate change than me, Alex or Simon.

The difference is that Graham Stringer is a Labour MP and Alex, Simon and I are Conservatives.

TheyWorkForYou have chosen a list of divisions (votes in the House of Commons) and decided they are representative of “measures to prevent climate change”.  But their choice of divisions is arbitrary and ill-judged.

For example, on 24 October 2019, I did (as TheyWorkForYou reports) vote against a motion calling on the Government to bring forward “a green industrial revolution to decarbonise the economy”.

But this motion was an Amendment to the Loyal Address – in other words, it was a motion proposed by the Opposition after the Queen’s Speech, asking for the Government to drop its programme of planned legislation and to adopt the Labour party’s manifesto in its entirety.  It was, in effect, a vote of no-confidence.  No one could reasonably say that my vote against this motion was a “vote against measures to prevent climate change”.

To be fair to TheyWorkForYou, there are surprisingly few votes in Parliament about measures to prevent climate change.  There is cross-party consensus on the importance of reaching Net Zero, so measures are often passed without a division (that is, no vote is recorded) – for example, Alex’s Climate Change Bill progressed through Parliament without once being forced to a division.

No serious political commentator relies on TheyWorkForYou for an insight into an MP’s political record, as the following articles (both from commentators on the left) acknowledge:

TheyWorkForYou is bad – but a world without it would be worse

Derek Thomas was first elected as the Member of Parliament for the constituency of West Cornwall and the Isles of Scilly (St Ives) in the 2015 General Election, becoming the first Conservative MP for the area since 1997.