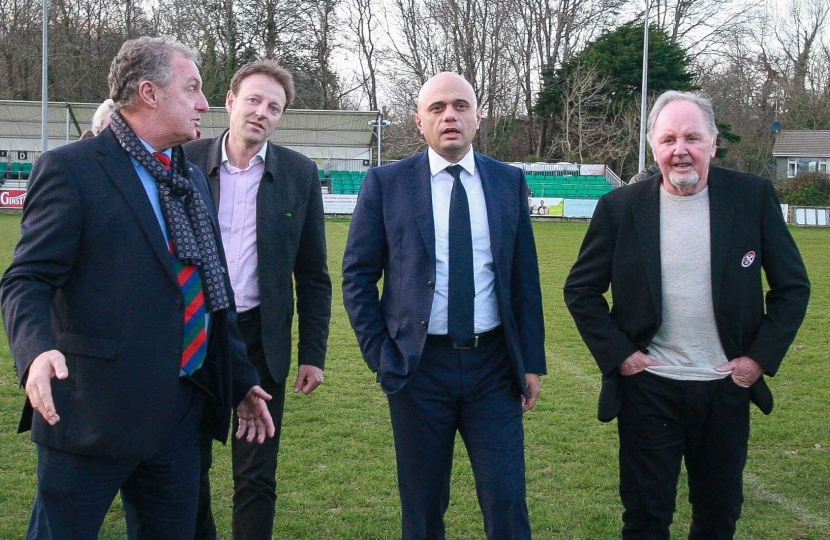 In 2019 I welcomed the then Chancellor, Sajid Javid MP, to the Cornish Pirates ground at Mennaye to ensure the Government fully grasped the vision and plans for The Stadium for Cornwall.

He quite rightly challenged us to ensure that, if tax-payers money was to be used, the Stadium was deliverable, and we subsequently received a letter from Government stating that we needed to secure the land at Langarth (which at the time belonged to a developer) and ensure the asset would be available for community use. The land was secured, and a Community Interest Company (CIC) was set up.

In 2020 £14m was given to Cornwall Council as unrestricted funds for a capital programme. There was a strong suggestion that the money could deliver the stadium, but the decision was made locally to spread the cash to several projects in Cornwall.

In Chancellor Rishi Sunak’s Autumn Statement last year, delivering the stadium was made possible through both Levelling Up Funds and Shared Prosperity Funds. Recently the decision has been made to prioritise other projects through Levelling Up funds (which is why the stadium project has hit the news again) and I fully understand why this has been done.

However, whilst the all singing, all dancing facility we had envisaged (the projected cost of the stadium had reached close to £30m), delivering a venue for elite Cornish rugby and football is still possible. We have a site with the necessary planning approval. Cornwall Council sits on cash that must be spent on securing a pitch for Truro Football Club and I’m aware of significant partners who believe this can be achieved.

During a series of conversations last week it is clear that there is a way forward but I’d like to see Cornwall Council put more effort into how the stadium can be achieved rather than seemingly put obstacles in the way. We have an ambitious council that wants to secure considerable new powers and money from Government. Delivering the Stadium for Cornwall would be a good test to see if the council is capable of great things! I’m still as committed as ever to get a stadium built and I’m definitely not alone!

Many will know that I am now running a survey to establish how well supported the ticket office is at Penzance Train Station. Official figures state that 86% of tickets are sold online which may be true but I very much doubt this figure reflects the number of passengers who avail themselves of the good service provided by Penzance ticket office staff. I suspect the vast majority of online sales are made by commuters who travel regularly. This would not be the norm in West Cornwall and I’m rarely alone in the queue when I go to get my train tickets to Paddington. The survey can be completed by going to https://www.derekthomas.org/penzanceticketoffice

Since concern has arisen regarding the future of Penzance Ticket Office I’ve identified other concerns. St Erth Station at times has no staff on hand to help and advise passengers despite the fact that trains run until nearly 10pm. I am taking this up with GWR. Also, there is industry-wide discussion about digital-only for tickets to travel the rail network. This would require every traveller to have access to an app on their smart phone. It is anticipated that 70% of over 75 year olds do not possess a smart phone and I personally prefer paper tickets. Are we seriously considering excluding this number of older people and scores of others from the rail network? I’ve no objection to reform but in the three areas I’ve identified any changes need to meet the needs of all travellers.

My office has now collated the NHS Dentistry survey results which can be found in a report on my website - you can go directly to https://www.derekthomas.org/dentalreport. The report depicts how poor access to NHS dental services is across Cornwall and the promised reform of the dental contract must deliver changes to the lived experience of wherever people live.

On Saturday Sustainable Pendeen are hosting another of their excellent events which promises to introduce anyone and everyone to renewable options for our homes, communities and travel, advice on energy efficiency, affordability and grants. Information on car-sharing, electric cars & chargers and electric bicycles. For the home you can learn about insulation, solar energy and heat pumps. There will be people on hand to talk about Geothermal Engineering and Lithium Mining in Cornwall and Methane Fuels from Cornish Farms’ Waste. Atlantic Energy will be on hand with ideas and plans for local Carbon Reduction as will St Just Climate Action Group and St Just Care and Repair. The event runs from 10.30am through to 4pm at the Centre of Pendeen and in the school playground opposite! From personal experience it is worth a visit.