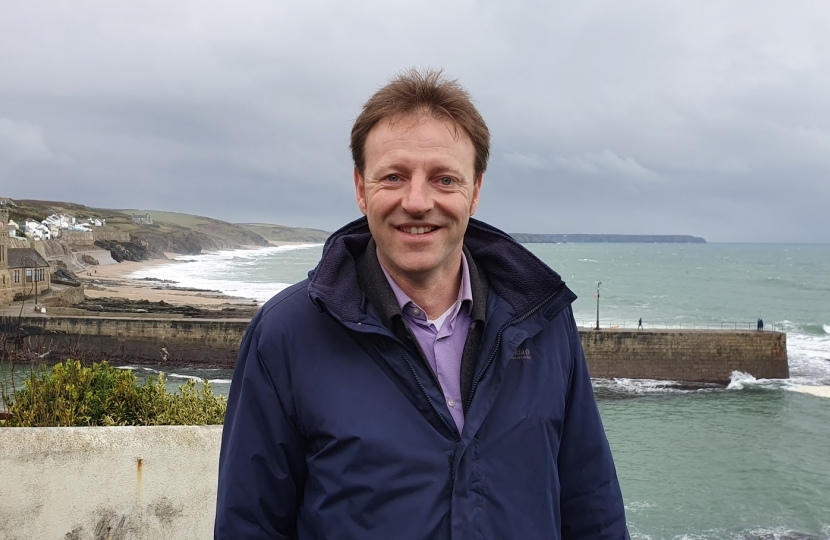 Hopefully many will have received prior notice of my ‘drop-in’ events that are planned for this weekend. They take place in Porthleven, Newlyn, Pendeen, Goldsithney, Long Rock, Godolphin, St Buryan and Manaccan. You can find out the exact times and locations by contacting my office or on local notice boards.

These events are designed for anyone to raise any idea, concern or issue directly with me and, where needed, I will raise the issue with the appropriate Minister.

This was basically how the plan to secure funding for the link to Scilly started. In similar ‘drop-in’ events on Scilly and in Penzance many years ago people raised various concerns about the link to Scilly including the fact that it was difficult, sometimes impossible, to get to and from Scilly if you have mobility issues. This was made more difficult for people when the helicopter service ceased. I remember an elderly mum on Scilly who had not seen her daughter who had mobility challenges and lived here on the mainland.

Following the budget announcement last week we can set about procuring the vessels and upgrading the harbours on Scilly. This should include step-free access to and from the ferry, an improved power supply to service a hybrid ship and vastly improved baggage handling methods. Both the freight and ferry ships will have greater capacity and will be designed to ensure a shorter more stable journey.

In Penzance we should see improvements to the harbour area to get delivery vehicles off the road and finally rid ourselves of some of the buildings that give such a poor impression of what is otherwise an important asset both in heritage and economic terms. This work is intended to be funded by the Towns Fund.

People will be unaware that we also sought funds to reopen the Marazion Train Station and see if it was feasible to connect Helston by rail. The Helston rail idea came out of a drop-in event I held at the Helston Bowling Club and we set to, with Helston CIC and councillors, to put together our bid for cash.

We were unsuccessful but have been told the ideas hold merit. This was a very competitive process and I’m grateful to everyone who worked so hard on these projects to make the case. The effort is not in vain in my view.

Personally I’m encouraged by the reports coming out of COP26. It is the case that the conference puts into perspective the sheer scale of the challenge and sadly, the potential futile effort if nations such as Russia, China and India do not fully engage.

It is difficult to keep track but our Government has set out an array of plans and commitments to drive down our carbon footprint at pace. This is vital but insignificant if we don’t secure the commitment of world leaders to follow suit and pick up the pace. However, the argument that it is the right thing to do and offers tangible benefits to everyone concerned in improved living standards, improved opportunities and improved health outcomes is gaining traction and this has to be a good thing.

I have been advised not to advertise the times of my upcoming drop-ins on this website, so please look out for notices in the venue or in the local press.

This page will be updated soon with additional drop-in dates, so watch this space.

What can an MP do?

MPs are elected to the House of Commons to represent the interests and concerns of all the people living in their constituency, whether they voted for them at the General Election or not.

I'm yet to meet anyone who thinks it's acceptable that sewage is being discharged along the Cornish coast and it is right and proper that Government requires Southwest Water to monitor and report these ‘storm overflow’ incidents.