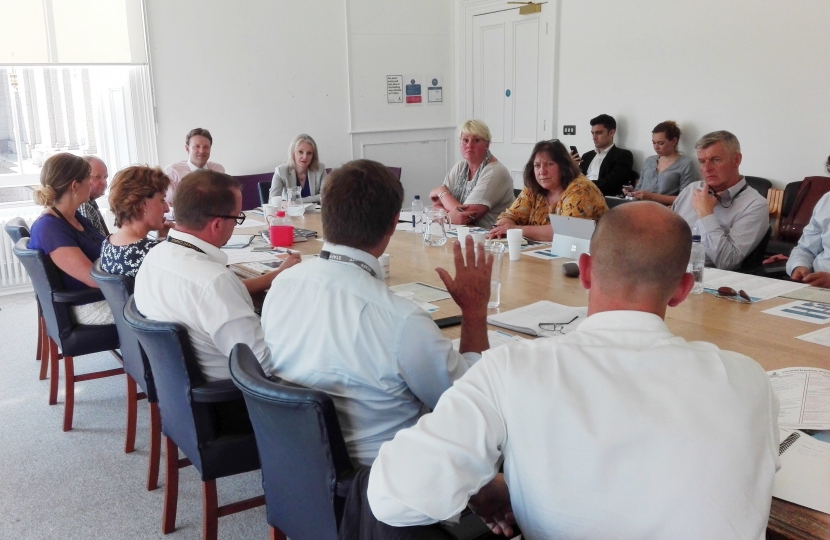 Derek has formed a working group with Emily Kent, Cornwall Council’s Head of Economy, Skills and Culture, to investigate how best West Cornwall can bring prosperity to areas of deprivation through Government investment. This follows a meeting between Derek and the Chancellor where Derek stressed the need for Government to ensure the proposed Shared Prosperity Fund (to succeed European Social and Structural Funds) continues to meet the needs of the most deprived communities including West Cornwall. The Chancellor invites contributions from communities to inform the discussions relating to what criteria should be applied to new funding awards via the proposed Shared Prosperity Programme.

The group, comprising around 20 local business people, Cornwall Council officers and elected representatives, share Derek's commitment to helping West Cornwall to "level up", targeting the areas that need it most and using government funds effectively and in accordance with each community's needs. Meetings occur every 3 months.

18 May, 2018: Derek meets Emily Kent to discuss the proposed group.

13 July, 2018: Inaugural meeting of the West Cornwall Jobs and Growth group is held at Penzance’s St John’s Hall. Chief Secretary to the Treasury, Liz Truss MP, is the first guest and gives a Government perspective on Shared Prosperity as well as asking the group for further information on how the group feels that Government can help address deprivation in West Cornwall.

12 October, 2018: Group meets to discuss High Street vitality and the barriers to growth in the area; issues raised included the difficulties involved in bringing redundant High Street buildings back into use, the over-valuation of High Street buildings, the importance of a shared community vision and the challenge of attracting sufficient skilled staff to West Cornwall.

2 November, 2018: Derek meets a sub-group to finalise the group’s submission to the West Cornwall.

19 December, 2018: Submission posted to the Chief Secretary to the Treasury.

18 January, 2019: Emily Kent reports that a bid for Penzance for Future High Street funding stands a chance of being accepted by Cornwall Council to be put forward for funding. Cornwall Council's Growth Team present a detailed report looking at employment, economic activity, housing and deprivation in West Cornwall - the presentation will help inform which areas benefit most from a future Shared Prosperity Fund.

6 February, 2019: Penzance is confirmed by Cornwall Council as the focus for its bid for a share of the Government's £675m Future High Streets Fund. Cornwall Council say Penzance has been selected due to the unique mix of regeneration opportunities available to tackle challenges in the town and which have been supported by local partners and stakeholders, the Penzance Place Shaping Board and Regeneration Group, businesses and community organisations. Proposals for workspace, housing, connectivity, transport, skills and inclusion activity will be considered over the coming weeks to prepare the submission by March 22nd.

15 March, 2019: Derek Thomas writes a letter in support of the bid, saying that the Future High Streets fund represents "a genuine opportunity to drive transformational change in Penzance, unlocking wider investments in the public and private sector, meeting local need for housing, employment and social prosperity".

3 May, 2019: The group meets to discuss how to address the skills gap; issues raised included the recruitment of skilled staff, future-proofing skills so that they are relevant in the future, the lack of a major industry in West Cornwall which could act as inspiration for college leavers and the need to improve transport infrastructure.

7 June, 2019: Industry and apprenticeships are the focus of the meeting.

5 July, 2019: Government announces that Penzance has successfully won through to the second stage of the £675 million Future High Streets fund and is in with a chance of attracting up to £25m of Government investment in its town centre thanks to work led by the local community with support from Cornwall Council.

6 September, 2019: The Government announces that St Ives and Penzance have both been selected to benefit from the Towns Fund, launched two months earlier. Each town will benefit from up to £25 million (separate to the Future High Streets funding) to help make them 'vibrant, prosperous, connected places'. Robert Jenrick MP, the Secretary of State for Housing, Communities and Local Government, said: “We want to level-up our great towns, raising living standards and ensuring they can thrive with transformative investment in transport, technology, skills and culture."

4 October, 2019: A similar meeting is held in St Ives - initial plans are outlined for the town to set up a place-shaping group, similar to the one already working well in Penzance.

I am continuing to campaign on business taxes, which affect the businesses in our communities.

Derek has spoken up for a National Food Strategy, which will ensure nutritious, locally-grown food for everyone in the United Kingdom.  Improving the nation’s diet will be a partnership between producers and consumers, and Derek spoke about Cornwall’s food producers and farmers.

After more than six months of negotiations, the Isles of Scilly Steamship Group has announced the successful completion of the sale of Penzance Dry Dock to Penzance-based engineering business Linked Solutions SW Limited.

Derek calls for a consensus on housing

Ensuring people can enjoy secure housing is the most effective way to deliver on the Government’s levelling up agenda.

Derek pledges his support for levelling up goals

MP Derek Thomas has put his name to a new set of ambitious goals aimed at improving people’s life chances and access to careers both in his West Cornwall constituency and across the whole country.

The announcement of several dozen home or hub-based job opportunities for young people has been enthusiastically welcomed by West Cornwall MP Derek Thomas.