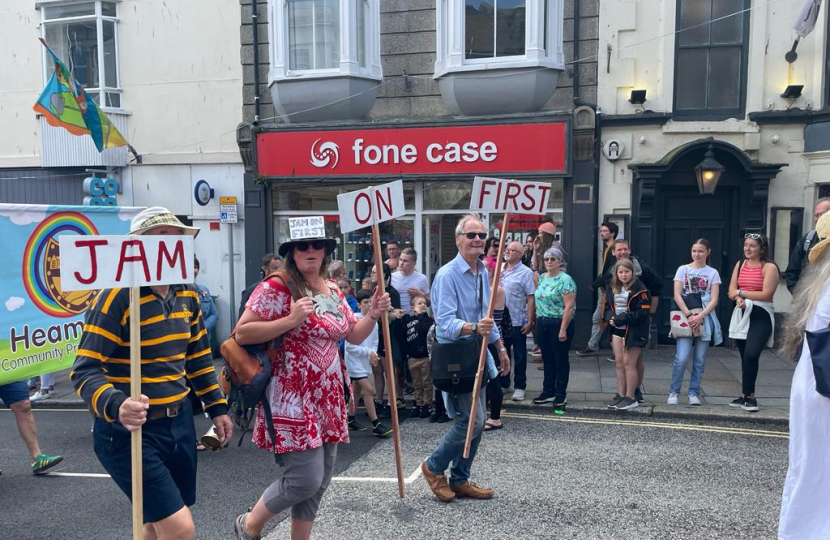 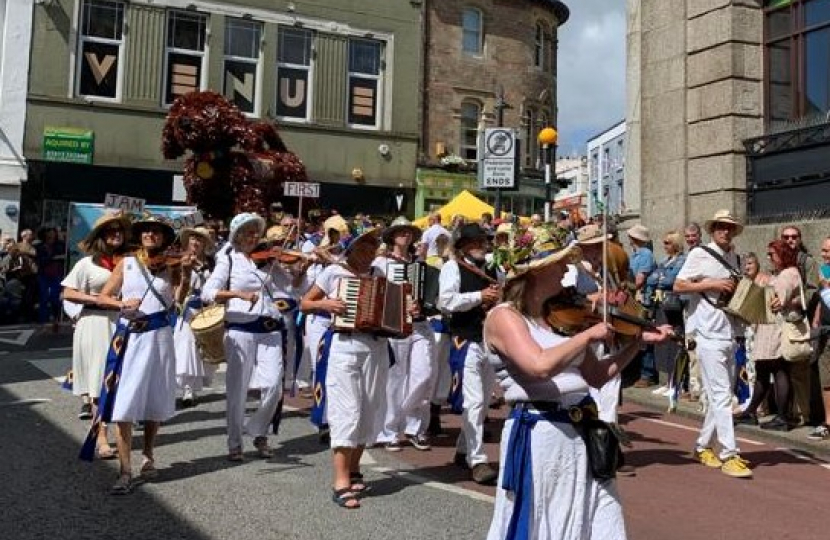 Mazey Day was a great day out and felt good after a three-year break from the usual colourful processions! The Golowan Festival team ensured that there was something for everyone as this Penzance festival returned in full after the pandemic.  At the risk of upsetting other important towns of the constituency, I reckon that it is the most colourful and creative annual festival, and the Mock Mayor adds a sense of irreverence which puts more smiles on more faces!

I love these occasions because it provides the opportunity to catch up with people whom I’ve known for decades but don’t see often and any opportunity to bring people together to celebrate and cheer has value in my book! It was also good to call on various community organisations including the Sea Cadets who offer a great service to our young people but don’t have the opportunity to promote this often! I know the Cadets will always welcome new volunteers and new ‘candidates’. The entire week’s events, organised by the Golowan Festival team ensured that there was something for everyone and the variety, talent and diversity is a credit to the team! You can catch up on the parts you missed on the Official Golowan Festival Facebook Page! Credit also to the Town Council for their continued support and engagement.

The Stadium for Cornwall has hit the headlines once again as our latest route to secure funding for the full development has hit the rocks. Delivering a venue for elite Cornish rugby and football is still possible. We have a site with the necessary planning approval. Cornwall Council sits on cash that must be spent on securing a pitch for Truro Football Club and I’m aware of significant partners who believe this can be achieved. I’d like to see Cornwall Council put more effort into how the stadium can be achieved rather than seemingly put obstacles in the way. We have an ambitious council that wants to secure considerable new powers and money from Government. Delivering a stadium for Cornwall would be a good test to see if the cancel is capable of great things!

As Government has sought to bring Northern Ireland completely back into the arms of the UK it is being accused of potentially breaking international law by trying to fix the Northern Ireland Protocol and free up the movement of goods between Great Britain in Northern Ireland. The truth is that the people of Northern Ireland should not be expected to accept the arrangements as they stand and certainly should not be the pawn used by Brussels and Great Britain in some political positioning exercise. It is also unacceptable that NI is subject to variations in tax arrangements. The UK Government is seeking to ease the cost of living and residents of Northern Ireland not able to fully benefit from these measures due to EU law. Curiously, the UK and Brussels have largely suggested a similar solution. We are suggesting a Green Lane for goods between GB and NI and a Red Lane for goods to and from the EU which will be subject to greater checks. Brussels is suggesting an Express Lane for goods between GB and NI, so it is the political posturing that needs addressing as much as anything and the draft legislation presented to Parliament is intended to force the issue as much as anything! In the meantime, the Northern Ireland Executive is not functioning which is putting considerable strain on the public services and, in turn, the people of Northern Ireland which undermines safety and security as much as any political divide.

I won’t dwell on the results in the by-elections other to say that having been to Tiverton and Honiton on four occasions during the campaign I know what the Conservative Government needs to do if it wants to remain in Government beyond 2024. I’m confident that this is possible, but we have a massive task on our hands and not much time!