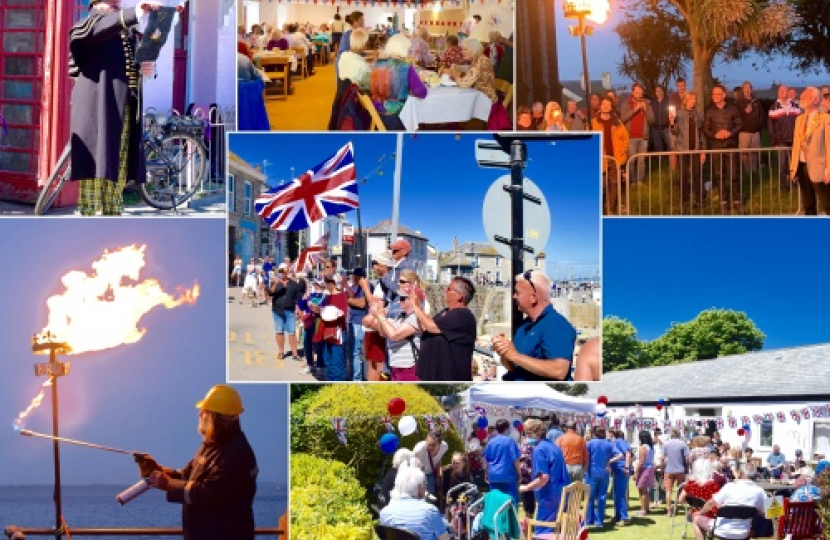 Two years ago, I was writing of the near complete shutdown of Cornwall to counter the spread of coronavirus. What a welcome contrast these past few months have been and it seems Platinum Jubilee weekend was the icing on the cake and restored much of the community spark that many of us previously took for granted!

So much seems uncertain in modern Britain but Her Majesty the Queen has a remarkable ability to inspire assurance and goodwill. It was good and timely to have the opportunity to mark her 70 years of service and to acknowledge the wisdom and grace she has demonstrated throughout. During the Jubilee celebrations, kicked off by the lighting of the beacons, I was privileged to attend a St Ives Community Choir concert in support of the Hain Project, the St Ia Platinum Jubilee church service, park lunches on Princess May and Coronation Park and see 70 years of classic cars on the Promenade in Penzance. It was not possible to get to everything or catch the coverage on TV and will have to catch up.

The Platinum Jubilee Weekend was a great success, and it was noticeable and encouraging to see people of all ages gather to celebrate and honour our Queen. I was particularly encouraged to see that Her Majesty the Queen has somehow captured the imagination and respect of younger members of our community. Primary and secondary schools have certainly done their bit in marking this important anniversary for the Queen and our country! None of this is achievable without an army of volunteers behind the scenes organising the events from road closures to food prep, marquee building to marketing. Thank you to everyone, including our town and parish councils, who got stuck in to deliver such an uplifting weekend!

On Tuesday Parliament recognised the 40th anniversary of the Falkland’s war by welcoming veterans, families who lost loved ones, the Band of the Royal Marines and Her Royal Highness The Princess Royal, to the Palace of Westminster. It was a significant moment if only to recognise the bravery and military skill of our armed forces who sailed nearly 8,000 miles to relieve the islands of the Argentinian invasion.

Sandwiched between this and the Platinum Jubilee was the vote of no confidence in the Prime Minister. Many people who live with more pressing challenges will wander what possessed Conservative MPs to trigger such a challenge. I accept this but I believe it was the right thing to do and necessary. The Prime Minister has secured the confidence of the Party and has the opportunity to work at pace to address the very real challenges people face whether it is living costs, housing costs, ambulance delays and food and energy security! People worry that the Conservative Parliamentary Party is divided but we actually work very well together. After all, we all stood on the same manifesto just over two years ago. The frustration is that we are not making the progress we expected and hoped for. There are good reasons for this but ultimately people deserve to see an improvement in their lived experience. This is why I went into politics, and I know I’m not alone.

The media this week may find reason to concentrate on No 10 or at least its occupant, but legislation not to be missed is the Levelling Up and Regeneration Bill which holds a significant opportunity to address the availability of housing for those who need it here in Cornwall and on Scilly. In a meeting with the Housing Minister and his officials two weeks ago I was encouraged that plans were being made to prioritise permanent residence for new homes, increased standards to improve the efficiency of new homes will be made law and the thorny issue of enforcement (or lack of) will be addressed!

I’m pressing for new homes to be protected for permanent residents and existing homes to require a license if they are to be flipped from a permanent residence to a holiday let or bolt hole! This will help to address the need for homes for local families and homes for people who accept employment here but can’t take up the post due to a shortage of affordable homes.

I’m still on the lookout for empty homes to meet the immediate crisis so please email any information you have to derek.thomas.mp@parliament.uk. We will identify the owner and see what can be done to make the house a home!