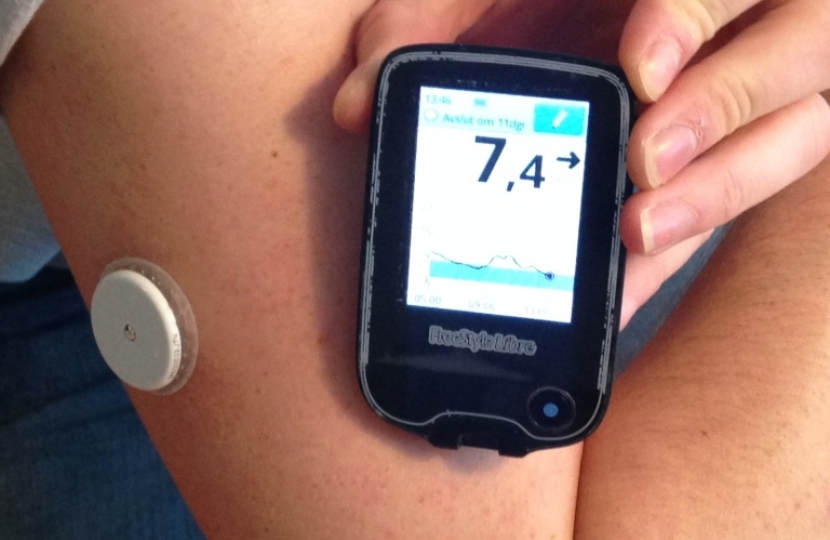 Derek chaired a meeting of the All-Party Parliamentary Group on Diabetes to celebrate the 100th anniversary of insulin, and to learn of creative new ways of treating patients with diabetes.  Comprehensive overviews of the latest research and innovation like this help MPs to understand the importance of supporting funding for diabetes.

All-Party Parliamentary Groups are an important part of Parliament, allowing MPs from across the House of Commons to work together on important issues with charities, experts, businesses and other stakeholders.  The APPG on diabetes ensures that the treatment of diabetes remains at the top of the NHS agenda, and, through meetings with Health ministers and NHS funders, drives the take-up of new technologies such as Flash Glucose Monitors.

Flash Glucose Monitors are worn as armpatches that record in real time glucose levels in the blood: they give much better control over day to day management of the condition and accurate data to medical practitioners.  This development, supported by the APPG, have enabled people to live their lives more freely, but are still not available to everyone.  The APPG is campaigning for NICE guidelines to recommend FGMs for everyone with diabetes, so that as many people as possible can benefit.

As Chairman of the APPG for Diabetes, Derek has worked with NHS commissioners, clinicians and medical health companies, as well as people with diabetes, to raise awareness of the condition and to press for improved treatment.

At the meeting he chaired, Diabetes UK gave a run-down of a century of diabetes breakthroughs, and looked to the future including immunotherapy and technology.  Rachel Ann Connor of the charity JRDF UK talked about modern immunotherapies, which are very specific and very targeted, training the immune system to protect the insulin-producing beta cells.  Finally Professor Partha Kar, the NHS’s National Specialty Advisor for Diabetes, talked about progress to widen access to Flash Glucose Monitors for people with type 1 diabetes and Continuous Glucose Monitors during pregnancy, as well as plans for the future, including increasing insulin pump uptake.

“The 100th anniversary of insulin is something to celebrate – it has saved vast numbers of lives since 1921, and enabled many more people to have a reasonable quality of life.

“The treatment has developed over the last century, with insulin pens, insulin pumps and flash and continuous glucose monitors improving the everyday lives of people with diabetes.

“We need to develop the treatment still more – and I am pleased to be in a position where I can push for the NHS to take up new technologies to administer this vitally important medication.”