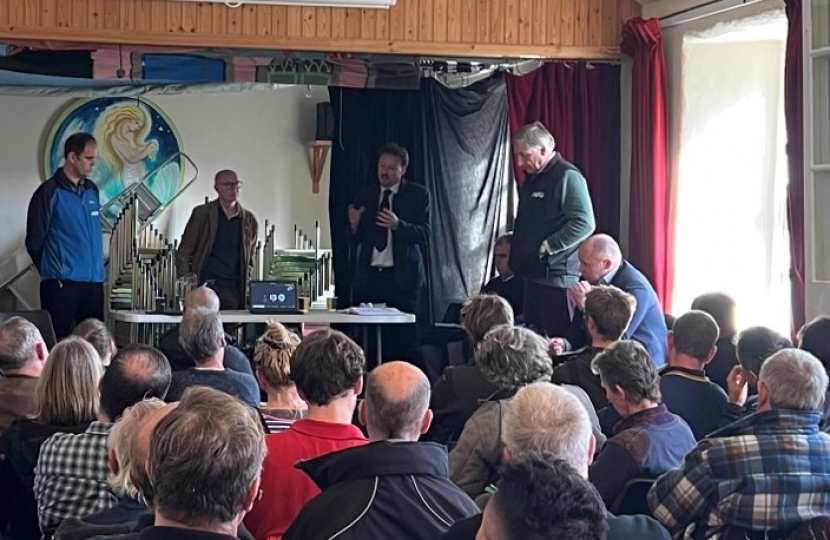 Derek is supporting British farmers in Westminster and in West Cornwall, and pushing food security up the political agenda.

Last week, he joined over 80 farmers and landowners who are concerned by Natural England’s plans to designate Penwith Moors as a Site of Special Scientific Interest (SSSI).  While Penwith is an important natural resource – largely because of the considerate way farmers have managed their land over the generations – the farming community is concerned that Natural England may restrict their ability to farm and produce food.

Derek listened to their concerns and is determined to ensure the SSSI enables farms to remain viable while safeguarding nature.  He will be meeting Natural England, and individual farmers, to find a workable solution to protecting the natural environment and farming.

Derek has been making the case in Westminster that farming and protecting the environment are not in conflict – in a debate on the Nature and Climate Declaration, and yesterday in a debate entitled “Support for British Farming”.

In Derek’s speech, he said

“We cannot speak enough about the need to support our farmers, who produce the food we need in a way that is good for the country and our health…

“Food production and biodiversity can complement each other; our mistake has been to give farmers the impression that they bear responsibility for our countryside and natural environment declining, and their job to fix it.”

He went on to argue that food security should be a public good, with public money only going to public goods – which includes protecting our environment as well as food production.

“Our farmers are vital – for our national food security, for our health and for our economy.

“The insatiable appetite for supermarket food to be cheaper often than the price of production can force farmers to make choices they would otherwise avoid but it is perfectly possible to make producing high-quality food and enhancing the natural environment complementary.”

In his reply to the debate, the Agriculture Minister Mark Spencer pledged the Government to the action Derek urged:

“We will move in a direction where we can balance growing food… with improving our environment and our biodiversity.

“The good news is that UK farmers are very much up for that fight…  [Derek] hit the nail on the head: farmers are part of the solution.”