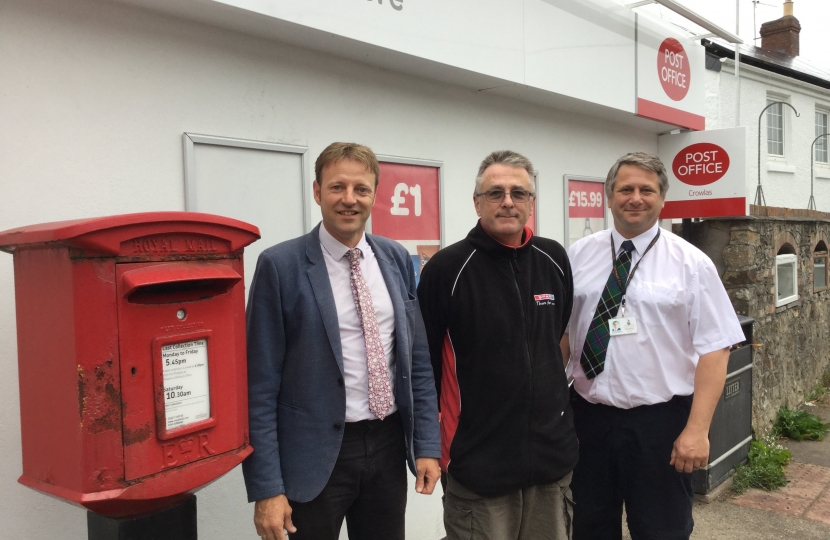 Derek believes it is essential to protect rural post office branches by making sure postmasters have a viable and sustainable business – the post office plays a vital role in local communities and their sustainability is even more vital at a time when many high street banks are closing.

In Parliament, Derek is Vice-Chair of the cross-party Post Offices group and is known as "a passionate advocate for post office services in his constituency".

May 2016: Mullion public meeting to discuss possible relocation of the Post Office to the Chocolate Factory.

May 2016: Derek joins campaign to try to save Penzance’s Crown Post Office and meets Sajid Javid MP, then the Secretary of State for Business, Innovation and Skills.

April 2017: Lizard post office public meeting at Lizard FC involving Stewart Taylor and Lewis Horn from Post Office Ltd. The current postmasters wish to retire but no suitable venue for the office can be found.

Derek also holds discussions with the postmasters in Porthleven and Leedstown about their futures.

December 2017: Derek seeks information from Post Office Ltd following concerns over the future of branches at Mullion, St Keverne and The Lizard.

20th December, 2017: Following consistent lobbying from Derek and other MPs representing rural constituencies, the Government announces £160 million will help to protect ‘last shop in the village’ community branches and ensure everyone continues to have access to their local branch.

11th September, 2018: Derek joins the newly-formed Post Office Parliamentary Group, which seeks to “raise awareness of the important economic and social contribution post offices and post masters make, to ensure their position as a vital public service and to provide input into the areas of public policy which affect the post office”.

October 2018: With post offices on the Lizard, at Porthleven, Carbis Bay, Leedstown, Heamoor, St Keverne and Newlyn all either shut or at risk of closure, Derek launches Save Our Post Office campaign, sending out petition cards to residents in the areas affected.

13th December, 2018: Following a speech by Derek in Parliament, Post Offices Minister Kelly Tolhurst MP announced that there would be an extension of the mobile post office service in West Cornwall to include Heamoor, Gulval, Carbis Bay, Leedstown, Praa Sands and Crowntown and also pledged that greater efforts would be made to ensure that rural sub-postmasters have a viable business. The Minister also agreed to discuss the situation further with Derek early in 2019.

14th January, 2019: With representatives from the National Federation of Sub-Postmasters (NFSP), Derek meets the Post Offices Minister and is promised further support. “The meeting was very positive – the Minister clearly recognises that rural post offices are under threat and indeed admitted that there are similar issues with post office closures in her own constituency of Rochester in Kent."

12th March, 2019: The mobile PO van used to provide services in Newlyn is moved from Mullion to a new overnight location in the Penzance area.

12th February, 2019: Hearing that Kelly Tolhurst is planning to visit the Torbay constituency, Derek urges the Minister, in the Chamber, to include West Cornwall in her itinerary.

July, 2019: After a persistent campaign over many months, Derek has welcomed the announcement of a mobile post office that will visit communities across West Cornwall currently without a service. However he was less enthusiastic about the resultant reduction of  a service to Newlyn was like ‘shuffling deckchairs’.

From Monday, 15th July, Gulval, Connor Downs and Leedstown started to receive a permanent mobile service while Heamoor, Carbis Bay, Constantine, Praa Sands and Porthleven were being served on a temporary service while Post Office Ltd continued to seek a permanent solution in these villages. Newlyn’s Tuesday and Thursday morning post office service is axed, leaving just an afternoon service on these two afternoons. Derek says this was a “retrograde step for people in Newlyn” and said he would press on Post Office Ltd to look at this again.

24th September, 2019: Derek hands over more than 150 A Post Office For Newlyn petitions to Stuart Taylor, from Post Office Ltd.

29th September, 2019: Derek welcome the introduction of improved charges to postmasters for handling bank transactions. The Banking Framework, agreed in 2017, allows 95% of business and 99% of personal banking customers to withdraw money, deposit cash and cheques and check balances at 11,500 Post Office branches in the UK. From the start of October, Post Office Ltd has increased the charges that postmasters will get for handling deposits – typically about three times what they currently receive.

18th October, 2019: Writes to the Post Offices Minister and the CEO of Post Office Ltd, urging them to re-introduce the two-day a week mobile service into Newlyn as soon as possible.

West Cornwall MP Derek Thomas has wasted no time in ensuring that Post Office Ltd managers are aware of the local strength of feeling about the reduction in Newlyn’s mobile post service.

Scores of petitions demanding the return of the two-day a week mobile post office service in Newlyn were collected by members of the ‘A Post Office for Newlyn’ group, West Cornwall MP Derek Thomas and local Cornwall councillor Roger Harding on Saturday.

West Cornwall MP Derek Thomas is urging Newlyn residents to ensure they fill in and return a petition calling for better post office services in the port.

One such opportunity is to drop it back by hand at 11am on Saturday, 21st September to the Strand in Newlyn.

While welcoming the announcement of a mobile post office that will visit communities across West Cornwall currently without a service, MP Derek Thomas says that reducing the service to Newlyn is like ‘shuffling deckchairs’.

9. What steps he is taking to ensure that people can access post office services in rural areas.

The Parliamentary Under-Secretary of State for Business, Energy and Industrial Strategy (Kelly Tolhurst)

MP Derek Thomas has welcomed a new post office deal which will give postmasters significantly higher fees for banking transactions but says he is ‘frustrated’ that a temporary, mobile van service, promised six months ago, has still not been rolled out across West Cornwall.

West Cornwall MP Derek Thomas says that there are encouraging signs that the Government will act to ensure that rural post offices have a viable and sustainable future after his latest meeting with Post Offices Minister Kelly Tolhurst MP.