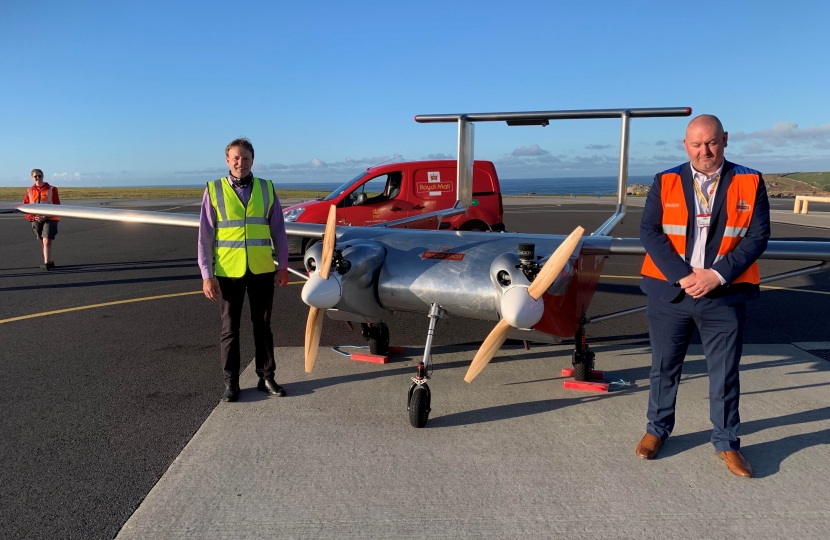 Mr Thomas saw first-hand how Royal Mail is trialling new technology to deliver the Universal Service Obligation to The Scilly Isles, a remote part of his St Ives constituency. During the visit he saw the drone take off and land early in the morning. He was also able to see the drone unloaded.

The drone has been used to deliver crucial PPE and COVID testing kits as well general mail to the Isles.

Mr Thomas said: “It was fascinating to learn about the benefits that drone delivery brings to pepople living in remote areas, the environmental benefits and the fuel efficiencies that the drones can provide.

“The trial offers up some very exciting possibilities for communities like the Isles of Scilly, providing islanders with the prospect of being able to rely on getting their post, medical supplies and parcels, in a timely manner whatever the weather and sea conditions may be.”

The Government-funded project, has been developed in partnership with DronePrep, Skyports, Consortiq Limited, University of Southampton, Excalibur Healthcare Services and Windracers Limited.

If the trial is successful, the technology will be considered by Royal Mail to help identify opportunities to support postmen and postwomen in delivering to very remote areas and addresses across the UK.

In December, Royal Mail became the first nationwide UK parcel carrier to deliver a parcel for recipients via drone to a remote lighthouse on the Isle of Mull in Scotland. In the coming months, a consultation will be undertaken with residents on the use of drones to deliver to rural communities on the island.