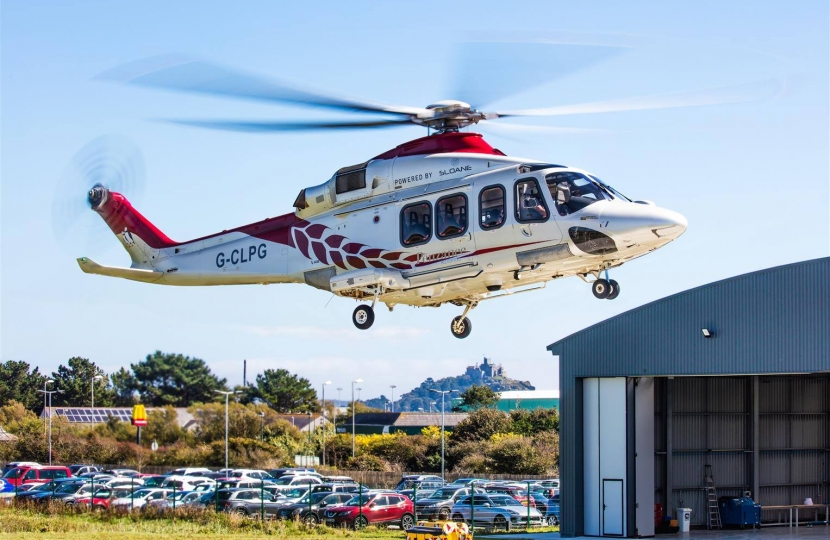 Derek has consistently backed moves for a new helicopter service, saying it demonstrates confidence in the economy in West Cornwall and will encourage further private investment.

He successfully blocked a Steamship Company attempt to engage the Government in overturning the planning approval, and has robustly encouraged the company to stop obstructing the heliport initiative.

Penzance Heliport Ltd announce plans for a new, privately-funded service, running from a site just over the road from the former heliport. The new service would see up to 17 flights a day to St Mary’s and Tresco.

Cornwall Council planners give unanimous approval to plans for the new heliport; a record 2,600 messages of support were submitted.

Construction work put on hold after the launch of a Judicial Review against the decision, the proceedings having been initiated by the Isles of Scilly Steamship Company.

A petition calling for the Steamship Company to rescind its legal proceedings has been signed by almost 9,000.

Penzance Heliport Ltd consents to judgement and says it will submit an amended application “to reduce uncertainty to the islands and the expense to Cornish taxpayers of going through the lengthy judicial review process”.

The amended application was granted planning consent in a second unanimous decision by Cornwall Council. Building of the new heliport started shortly afterwards.

The first services from the new heliport began, flying to St Mary's and Tresco.

West Cornwall MP has welcomed the decision of Cornwall Council's Strategic Planning Committee to approve planning permission for a heliport at Penzance.

"I believe this unanimous decision will prove a boon for many," said Mr Thomas."