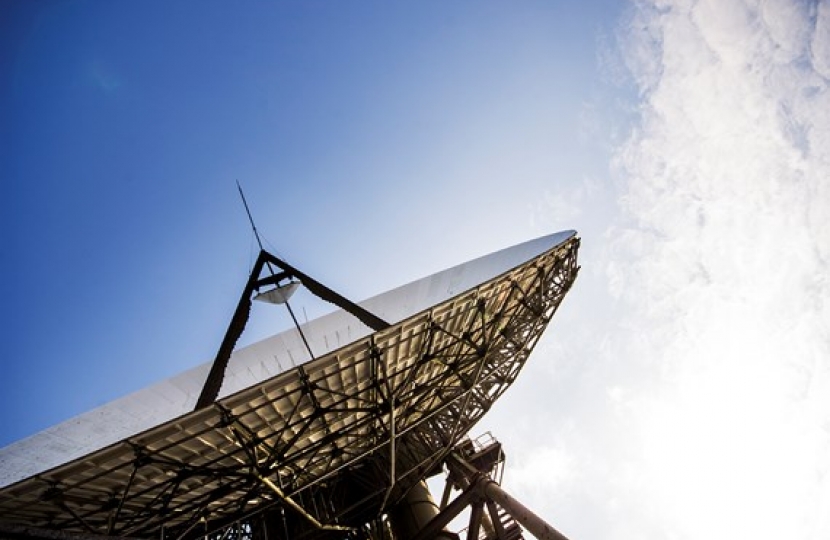 Goonhilly Earth Station has established itself as one of the most strategically important sites in the world-wide space sector and has the potential to provide jobs not just at Goonhilly but across West Cornwall and the Isles of Scilly. Derek is supporting its ambitions to become a global player in space exploration as part of his focus on bringing well-paid jobs in science and technology to West Cornwall.

The European Space Agency (ESA) commissions a study to examine whether Cornwall’s Goonhilly Earth Station could provide communications support to the Orion Exploration Mission 1 in 2018, using the 32-metre No.6 Antenna to support the unmanned flight of the Orion Multi-Purpose Crew Vehicle (MPCV) around the Moon.

West Cornwall MP Derek Thomas introduced Goonhilly’s chief scientist, Matt Cosby, to the Universities and Science Minister, Jo Johnson, when they were able to talk about plans to upgrade the station’s largest antenna so that it is suitable for deep space communications.

Mr Cosby says that a proposed £8.4 million upgrade, which would be funded by Growth Deal money through Cornwall’s Local Enterprise Partnership (LEP), would enable the antenna to support human flights around the Moon.

Goonhilly is currently working with the LEP and the UK Space Agency to secure the project and the meeting with Mr Johnson gave Mr Thomas and Mr Cosby the chance to press home the case for an antenna upgrade when they stressed the fact that the project would not require funding by the Government or the UK Space Agency.

“We believe this upgrade has the potential to add significantly to the prospects for space sector growth both regionally and nationally,” said Mr Cosby.

“It would help generate a diverse supply chain in the region that will be further enhanced by the development of a spaceport at Newquay.

Mr Cosby added that as well as enabling the Goonhilly Station to become a base for deep space communications, the upgraded antenna could also be used for robotics missions, Space Situation Awareness and to help track spacecraft that travel over the UK.

Derek said the Deep Space Communications project was “hugely exciting” and could potentially make a big impact on the local economy if it goes ahead.

“Upgrading the antenna is a big deal for West Cornwall and the UK,” he said.

“Skilled jobs created and a reputation as a global player in the space sector are up for grabs and we should seize the opportunity. Everyone of us relies on this technology in some way or another and Goonhilly Earth Station is an important part of this modern age.”

The project, announced by the Cornwall & Isles of Scilly Local Enterprise Partnership (LEP), will see Goonhilly upgraded to enable it to provide deep-space tracking and satellite communication services on a commercial basis and capable of tracking future missions to the Moon and Mars.

“Goonhilly Earth Station has established itself as one of the most strategically important sites in the world-wide space sector and has the potential to provide jobs not just at Goonhilly but across West Cornwall and the Isles of Scilly,” he said.

“I’ve been able to introduce Goonhilly directors to a number of Ministers over the past couple years and they have all been impressed with the scope of the ambitions at Goonhilly and the skills and professionalism they bring to this very exciting sector.”

The investment will see ESA working with Goonhilly to upgrade one of its largest antennas, the 32 m-diameter GHY-6 antenna built in 1985, to meet the performance and technology requirements needed by ESA, NASA and private space exploration companies for deep-space communications, including high bit-rate data links.

As well as taking on 18 new staff, the team at Goonhilly are expecting a significant upsurge in interest in the space sector in Cornwall.

Britain’s most famous astronaut Tim Peake was on the Lizard for the opening of the world’s first commercial deep-space communications station, capable of tracking future missions to the Moon and Mars.