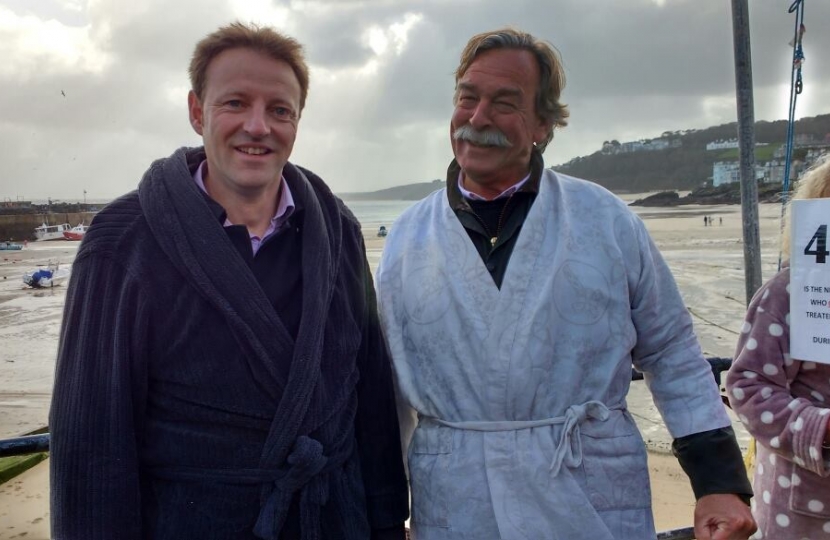 Edward Hain was, along with all other Cornish and Scilly hospitals, operated by Peninsula Community Health until April 2016 when it was transferred to the Cornwall Partnership Foundation trust (CPFT). The building is owned by NHS Property Services.

A standard fire safety review resulted in the hospital being closed to in-patient services. The beds were closed and patients and staff transferred to other community hospitals (mainly Helston and Camborne-Redruth).

The CPFT identifies further work as necessary for the safe evacuation of patients but cannot pay for it as their contract only has a year to run.

Kernow Clinical Commissioning Group (KCCG) are responsible for services, not capital expenditure and are unwilling to spend money on the building until they have established the community bed needs of Cornwall and Scilly.

NHS Property Services agree £213,000 of work as their responsibility; the League of Friends have offered £600,000 toward the total £1.1 million cost of repairs.

The KCCG announce that a firm decision on Edward Hain will not be made until the publication of the ‘Shaping the Future’ document (the Sustainability and Transformation Plan) which has been delayed until the end of  2017.

600 people in their dressing gowns rally for silent ‘Hands Across the Harbour’ event highlighting the ongoing closure of beds at Edward Hain Hospital.

Derek meets Health Secretary Jeremy Hunt to discuss how Edward Hain community beds can be re-opened as soon as possible.

Second meeting of working group. Derek said he was “optimistic that progress is being made”. “For the first time we now have everyone, including representatives of local campaign groups, talking constructively around the table,” he said.

“We are exploring every opportunity to reopen the beds to assist with the delayed transfer of care at RCHT and, to support this effort, I have raised this priority directly with Jeremy Hunt. There’s no doubt that the Hands around the Harbour event has helped to bring people together to focus on the need for adequate and sustainable health and care provision in the West of Cornwall.”

St Ives mayor Suzanne Tanner hands over dozens of letters in support of the reopening of beds at Edward Hain to Derek.

Derek Thomas: “I believe Edward Hain could and should reopen as a local health and care centre for St Ives and Hayle to include community beds. Every avenue is being explored to find a way forward.”

The third meeting of the group  set up by West Cornwall MP Derek Thomas and Cornwall councillor, Richard Robinson to facilitate the reopening of the St Ives hospital,  head that a feasibility study to consider all options for Edward Hain is set to be undertaken this Spring including how to address the challenges facing patients and medical staff in accessing and providing treatment.

Consideration was given to whether parts of the hospital could be used to provide accommodation for nursing and healthcare staff, recognising the particular challenges of housing in St Ives.

An extension to the rear of the building, an idea first proposed by the former Friends of Edward Hain Memorial Hospital Chairman Chris Cocklin, who died recently, was also discussed.

Mr Confue’s offer came in the wake of concerns that the existing building, even with necessary fire and safety works completed, would still not be particularly well suited to housing hospital beds given the ever higher standards that are expected of healthcare facilities in the 21st century.

Architect Mark Carter outlines preliminary plans for Edward Hain to group members, turning the shell of the existing building into key worker accommodation and providing a new build for out patients’ clinics and consulting rooms. The new build would provide c712 sq metres of space and cost around £2.5 million. He agreed to draw up a second set of plans to include community beds in time for the group's next meeting.

Group meeting discussion focuses on the possibility of making greater use of Edward Hain through the introduction of a winter pilot project bringing prevention and re-ablement services to the hospital. Initial scoping work on the project is to be carried out by the KERNOW Clinical Commissioning group (KCCG).

Rachel Murray, from the KCCG, outlines plans for the Winter Pilot project, with a range of services, including falls prevention, physiotherapy, social and massage therapies and bathing facilities, to be provided during the day by providers, including the NHS, Age UK, Volunteer Cornwall and Active Plus (see article below).

The Winter Pilot project gets underway. The project provides prevention and re-ablement services at Edward Hain through a multi-disciplinary team of providers, including the NHS, Cornwall & Isles of Scilly Age UK, Volunteer Cornwall and Active Plus. During the course of the initial project, 24 referrals were made with 17 people being seen on a regular basis.

At a meeting of the Edward Hain Working Group, Anita Cornelius, from the Cornwall Partnership Foundation Trust (CPFT), announced that the Winter Pilot project would continue until 30th June.

The nine-month pilot project at St Ives’ Edward Hain Hospital trialling a new approach to caring for elderly and vulnerable people is hailed as a ‘huge success’.

The project, which started in January, initially for just three months but extended until the end of September, saw 27 people benefit from the services provided by volunteers and a multi-disciplinary team of professionals working in the health sector, led by Sheena Arthur from Age UK.

Mr Thomas commented: “The project has been a huge success which has shown the benefits of co-operative working. The project team have taken a refreshing, common sense approach which has clearly paid dividends and they have been helped in their work by being able to use a trusted and sympathetic building in Edward Hain.”

A nine-month pilot project at St Ives’ Edward Hain Hospital trialling a new approach to caring for elderly and vulnerable people has been hailed as a ‘huge success’.

West Cornwall MP Derek Thomas has welcomed the announcement that the Edward Hain Winter Pilot project will continue to stay open until the end of June.

New services are set to increase the use of Edward Hain Hospital in St Ives this winter as part of a pilot scheme designed to give greater support to local people, getting them home from hospital quickly and safely and helping to avoid repeat admissions.

At their latest meeting, members of the Edward Hain group were shown a set of plans that showed one possible use for the hospital site which looked at the potential for a new build to the rear of the existing building.