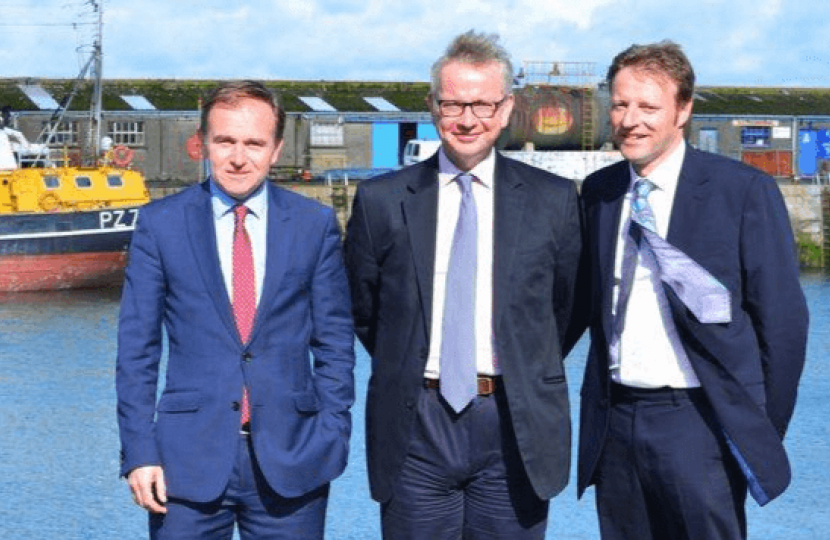 However, in West Cornwall there are several challenges – fishermen want a good deal out of Brexit and the port of Newlyn needs investment if it is to maximise its potential in the future.

Derek is a member of the influential Environment, Food and Rural Affairs Select Committee, which holds the government to account for its fisheries policy.

Derek meets inshore fishermen at Cadgwith to celebrate a victory over plans by the Marine Management Organisation (MMO), who said that because fishermen were not catching enough fish, they may face being penalised.

Derek said: “Various initiatives that were intended to support the industry are in fact frustrating the inshore fleet, which is so important to our coastal fishing communities. A commercially sustainable fishing industry is very important for these small coastal villages as the set-up to support their industry relies on a critical mass of inshore boats and fishermen to make ends meet.

“At our meeting in Cadgwith, we agreed a number of measures that I am taking forward to help the situation.”

Derek meets fishermen in Newlyn and hears their priorities following the Leave Referendum vote a month earlier. These include taking full control of UK waters out to the 200-mile limit, the 0-12 mile limit to be for UK fishermen only, a greater share of quota and the continuation of tariff-free access to EU markets.

Derek accompanies Fisheries Minister George Eustice on a tour of Newlyn harbour and pier, discussing infrastructure opportunities with the harbourmaster Rob Parsons, attending the AGM of the CPFO and meeting fishermen for an informal drink to hear their concerns.

Cornwall Council leader Adam Paynter travels to Newlyn to meet Paul Trebilcock with Derek, where they highlighted the importance of fishing to the Cornish economy.

Derek speaks in Parliament at the annual fishing debate, urging the Government to give more support to the Cornish fishing industry. He highlighted the development plans for Newlyn Harbour which would encourage “innovation, unlock potential within the local fishers and bring in necessary improvements to current infrastructure” but called for an overhaul of current funding systems which “do not adequately recognise the needs of the Cornish and wider fishing industries. Small fishing businesses in my constituency that do not have reliable cash flows struggle to capitalise on reimbursement-based grants.”

He also argued for a level playing field when it comes to the regulations concerning development. He pointed out that those in the Cornish fishing industry look despairingly at their Scottish counterparts who have long been able to use European Regional Development funding for ports and harbours. This is because Scotland negotiated a block exemption on state aid rules.

In another Westminster debate on UK fishing, Derek argues that fishing should not be part of any transition deal and that leaving the EU presents a ‘once-in-a-lifetime opportunity for the UK fishing industry to take a different and better path’; see article below 'Derek Thomas speaks during this week’s Westminster Hall debate on Future UK Fisheries Policy'.

As part of a group of MPs, Derek meets David Davis, Minister for Exiting Europe, and the Chief Whip to register disapproval at the fact that EU fishing policies will continue to be in force during the transition period.

Derek welcomes Fisheries Minister George Eustice to Newlyn to discuss the industry's future with members of the CFPO; Mr Eustice assures those attending that fishing will be a 'totemic' issue during negotiations as the UK prepares to leave the EU.

In a House of Commons debate, Derek presses Environment Secretary Michael Gove on the future of the fishing industry in West Cornwall. Mr Gove said Newlyn was one of the most important ports in the South West and assured Derek that the Government would work to ensure that the port gets the investment it needs in order to regenerate and to take advantage of additional opportunities when the UK is no longer party to the Common Fisheries Policy.

During a debate on the Second Reading of the Fisheries Bill, Derek pressed the Government to “reject any future proposals from the EU that seek to wrestle away control of access to UK waters”. He said that fishermen in West Cornwall broadly welcomed the Bill because its primary objective was to promote sustainable fisheries management, something that the UK, particularly Cornwall, was already a world leader.

Currently UK fishermen currently only have access to 7% of the cod inside the UK’s 200 mile limit: taking control of access to UK waters would ensure they get a fair deal and would enable them to catch more because of their commitment to sustain stocks. He also urged Environment Secretary Michael Gove to ensure that the Bill takes on board the proposals of the Newlyn-based Cornish Fish Producers’ Organisation (CFPO) that the Government establishes a formal advisory council which includes fishermen and fishing experts to decide future fishing policy and strategy and to take a practical approach to sustainable fisheries management.

Against the backdrop of Brexit-related economic uncertainty, the Newlyn Pier & Harbour Commissioners take the decision to focus on improvements to the harbour environment that will bring tangible benefits in the current climate rather than longer-term, larger-scale development via EU funding.

A decision has been made to continue to work to deliver the improvements needed, working closely with the community, so that what is finally achieved will have broad support and makes good use of the finances and assets of the Harbour Commission.

Derek pledges to hold the Government to its word that funding will be made available to provide the harbour infrastructure needed for a sustainable prosperous UK fishing industry.

"What utter nonsense," he said. "Boris Johnson’s deal will allow us to leave the Common Fisheries Policy, a policy that has inflicted huge damage on our fishing fleet. We will no longer be bound by the EU’s ‘relative stability’ measure, and we will have an opportunity to upend fishing quotas that give a disproportionately large share of fish to other countries. Our fishermen have historically received an unfair share of quota allocations. For example, in the Celtic Sea, France gets nearly three times our allocation of dover sole and four times more cod. More than £20 million of fish is landed every year right here in Newlyn alone. Add in seafood processing, and the industry is worth almost £100 million to the Cornish economy. Outside of the Common Fisheries Policy, I believe that this industry has an even brighter future. The Government is ready to invest in coastal communities so they can seize the opportunities that arise after we leave the EU."

George Eustice, the Secretary of State for the Environment, Food and Rural Affairs – who has responsibility for the UK’s fisheries - today visited Newlyn to hear from the Cornish fishing industry.

Against the backdrop of Brexit-related economic uncertainty, the Newlyn Pier & Harbour Commissioners have taken the decision to focus on improvements to the harbour environment that will bring tangible benefits in the current climate rather than longer-term, larger-scale development via EU fu

Derek Thomas welcomes Michael Gove’s statement on the future of fishing and his commitment to help Newlyn.

West Cornwall MP Derek Thomas has welcomed the Environment Secretary’s statement that the Government will look to support the regeneration of Newlyn and its fishing industry as the UK prepares to leave the EU.

The UK's agreement to keep EU fishing policies during the Brexit transition period is “very disappointing”, says West Cornwall MP Derek Thomas, who has pledged to fight to change the terms of the agreement.

Leaving the EU presents a ‘once-in-a-lifetime opportunity for the UK fishing industry to take a different and better path’ and, as such, it should not be part of a broader transition deal, West Cornwall MP Derek Thomas has told Government.