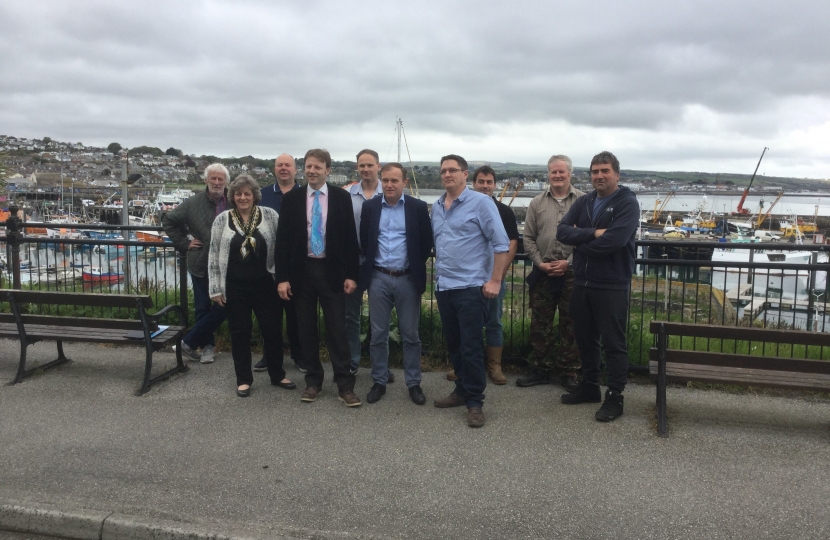 Mr Thomas shared the anger of many in the fishing industry that, under the terms of the transition deal agreed in March, fishing will effectively remain part of the EU's Common Fisheries Policy, subject to EU quotas throughout the 21-month implementation period and will have no direct say in its rules.

At the time, Environment Secretary Mr Gove said the Government had pressed for the UK to be an equal partner in fishing negotiations during the implementation period but the EU had blocked this.

At the CFPO (Cornish Fish Producers Organisation) headquarters in Newlyn, Mr Eustice, who also expressed disappointment at the deal, gave a group of fishermen and those involved in the industry a timeline of major events in the Brexit negotiations including the passage of the Fisheries and EU Withdrawal Bills through Parliament.

He also confirmed that three key objectives which had been highlighted by the CFPO in their submission to DEFRA – control and access of UK waters out to 200 miles, a greater share of the Total Allowable Catch in UK waters and no, or minimal, tariffs for fisheries’ products – would be included in the Fisheries Bill.

Despite the bad news about the implementation period, the Minister said that fishing was in a ‘strong position’ in the long term and he did not consider that the EU would make fishing a major source of contention in a final deal.

Mr Thomas thanked the Minister for attending “a very positive and open” meeting.

“I am very grateful to the Minister for coming to Newlyn – he left everyone in no doubt that fishing is a totemic issue,” he said.

“One of the advantages of the furore that occurred after the bad news about fishing and the implementation deal is that it has highlighted to our Brexit negotiating team that the industry, although making a relatively small contribution to the UK’s overall GDP, does play a vital role in many coastal communities and they would ignore it at their peril.”

Paul Trebilcock, the CFPO chief executive, added: “We really appreciate the efforts and commitment of Derek when it comes to fishing in Cornwall. He understands the importance of fishing locally and nationally. He has clearly listened and understood our concerns and reflected them at the highest political level.”