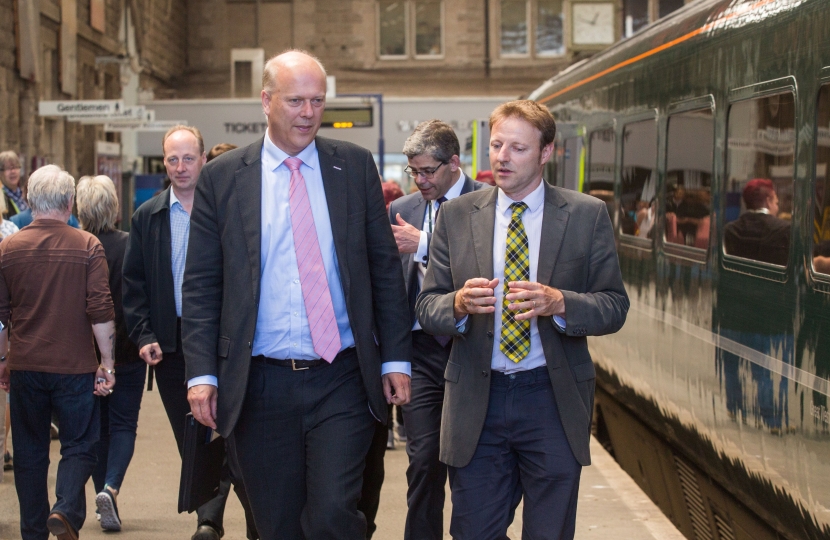 MP Derek Thomas said the visit of Transport Secretary Chris Grayling to his West Cornwall constituency gave him a welcome opportunity to drum home the need for road improvements and a new A30 bypass between Long Rock and St Erth.

Along with Cornwall Council transport portfolio holder Geoff Brown and Glen Caplin, from the Cornwall & Isles of Scilly LEP, Mr Thomas met the Secretary of State at Penzance station on Friday lunchtime where they were shown the new GWR Castle Class train and Sleeper Lounge.

The party then headed over to Long Rock on one of First Cornwall’s new fleet of buses to inspect the £20 million Train Care Centre before travelling along the A30 to see how work is progressing at the St Erth Multi-Modal Hub.

“I was delighted that the Minister was able to see for himself the benefits West Cornwall is getting from the Government’s investment in the rail network and transport infrastructure in the far South West – it really will make a difference,” said Mr Thomas.

“It was also good that he was able to return to look again at the issues in terms of congestion, road safety and reduced quality of life for those living alongside the A30 to St Erth.

“A year ago, he stood at the Crowlas crossroads for half an hour during the morning rush hour and witnessed all the issues from a pedestrian’s viewpoint – this time, driving along the road to St Erth, he was able to get a further perspective on why this stretch of road is not fit for purpose as a main trunk road in the 21st century.

“When I was first elected, the bypass idea was on no one’s radar, it certainly was not a priority for Highways England or Cornwall Council. Now, with the help of The Crowlas Bypass Now group, who have done a great job, there is a real hope that it will be included on the next phase of the Government’s Road Investment Strategy programme and Highways England is doing work this summer to decide the best way to improve and make safer the existing road.

“Having Chris Grayling here raises the profile of this section of road still further and I believe he is fully aware of the impact that having a sub-standard link road has not just on those living in the communities lying along the road but the whole economy of West Cornwall.”

During his visit, the Secretary of State stated that a priority for the Government was to dual the A30 from Camborne to Penzance once the Chiverton to Carland Cross section has been completed.