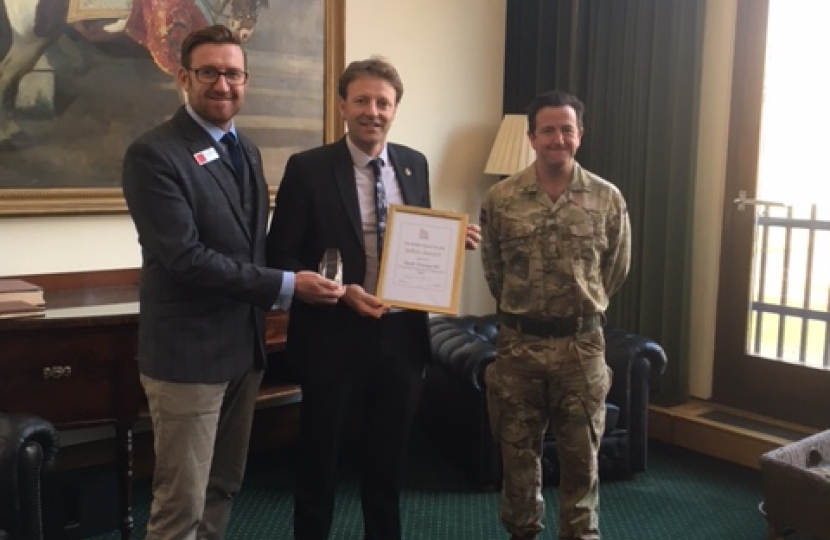 West Cornwall MP Derek Thomas has received a prestigious award recognising the work he has done to improve the safety of horses and their riders on UK roads.

Mr Thomas went to Hyde Park Barracks to receive the Sefton Award from the British Horse Society (BHS), recognising his commitment to bringing the issues of horse and rider safety to the attention of Parliament.

Almost two years ago he was contacted by a constituent, Debbie Smith, whose online petition about ‘passing ​wide and slow’ and calling for stronger legal protections for riders has now been signed by almost 140,000 people.

As a result of their discussions, Mr Thomas secured a Westminster debate on rider safety, calling on the Government to launch a marketing campaign promoting safety measures for horses on rural roads and a reduction in the speed limit from 60mph on single carriageway rural roads.

Ministers said that this lobbying had resulted in the Department for Transport doing more to promote road safety and helping to provide statistical analysis to the Horse Accidents website.

More recently, in a parliamentary debate on traffic offences and sentencing which had a particular focus on cyclists and pedestrians, Mr Thomas spoke of the UK’s ‘forgotten’ horses and riders and urged the Government to implement speed limits and minimum distances when drivers are passing.

“I am very proud to receive this award, recognising the fact that horse and rider safety is now being taken more seriously by Government,” said Mr Thomas

“There are large numbers of horses and riders in a rural area like West Cornwall and the shocking statistics, which show that 85 per cent of accidents involving horses are caused by vehicles passing too fast or too close to the animals, indicate that much more must be done to improve safety.”

David Sheerin, BHS chairman, said: “Derek has also been extremely supportive of the BHS, regularly keeping in touch with the safety department and kindly offering to host the VR Film launch at Westminster.

“This launch ensured all main partners and stakeholders in road safety were able to support and network during the event, resulting in further major links and partnerships.”