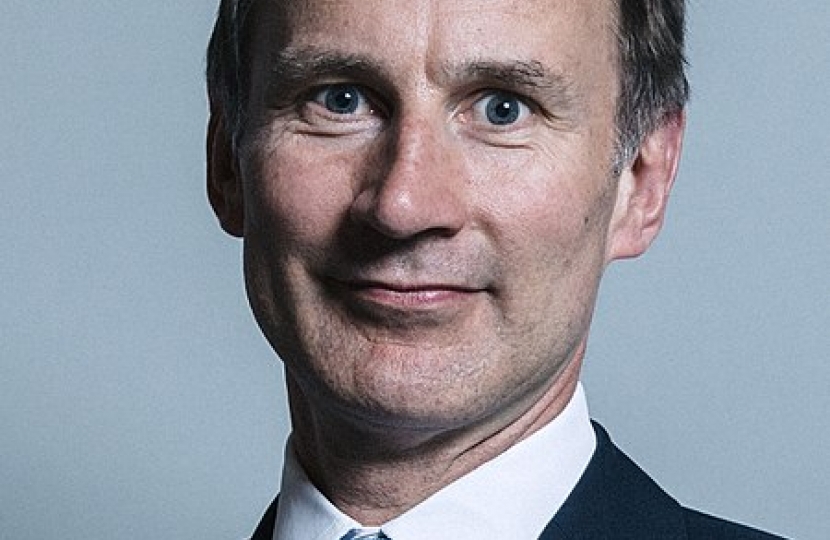 Thank you for your letter and warm words for making the final two. I also really appreciate the opportunity to respond to your questions as I believe it is vital that your members can make an informed decision in this important contest.

As you may have seen I believe this campaign is fundamentally about who members trust to actually get a deal that enables us to leave the European Union. As an entrepreneur who has been doing business deals all his life; an experienced Cabinet Minister who has negotiated a BBC Licence Fee, the junior doctors’ contract and peace talks in the Yemen; and a Foreign Secretary with good relationships with European leaders I believe I am that candidate.

My plan is clear. I believe it is in our country’s best interests to leave with a deal but that means negotiating a new one, in particular re-examining the Irish Backstop. I will create a new negotiating team with members of the DUP, ERG and Scottish and Welsh colleagues. This will mean the European Commission can be confident that any deal we present will be able to pass through the House of Commons. But, if on 31 October there is no prospect of securing this better deal – without a backstop that could trap us in the Customs Union – then I will leave without a deal. Such a course is not without risks – to businesses and the Union – so I would only do so as a last resort. But I truly believe we can get a better deal and that I am the candidate that can do so.

I’m incredibly proud to have been part of the Government that has legislated to reach net zero carbon emissions by 2050. This is obviously an ambitious target, but one that is achievable and vital that we achieve it to preserve our planet for future generations. We have already made decent progress as we are well on our way to phasing out coal entirely by 2025 and we will end the sale of new petrol and diesel cars and vans by 2040. But I would go further and have already announced plans to introduce a Clean Air Act to give local authorities the power and funding to introduce pollution free cities. And I would also fund the roll out of a national network of 2.5 million electric charging points.

On education I would reverse the per pupil funding cuts and make ending illiteracy the next social mission of the Conservative Party. It is a national scandal that one in six adults are functionally illiterate and it is simply not possible to create the dynamic, entrepreneurial society whilst this is the case. I would also cut the interest rate that students pay on their tuition fees from the frankly, astronomical six percent to just RPI. Finally, I believe we must do much more to help the 50% of young people who do not go to university, and I will be announcing plans on this during the course of the campaign.

My main priority after securing our exit from the European Union is to turbo-charge our economy. As an entrepreneur who started their own business and ended up employing 200 people I know how hard it is to run a business. So my Government would prioritise supporting business because it is the wealth creators in our society who generate tax revenues that support our public services. I would therefore cut corporation tax to 12.5%, increase the annual investment allowance from £1m to £5m, and take 90% of high street companies out of business rates altogether. I set up my business when I was young, and I believe the government should support those who do the same. So I would cancel the tuition fee debts of young entrepreneurs.

Keeping people safe is one of the first duties of any Government and I do believe that police cuts have gone too far. I am carefully considering Sajid Javid’s suggestion to fund an additional 20,000 police officers and am committed to looking into the impact a reduction in police numbers has had. I would use all the resources of government, from policing to health to education to welfare, to address the underlying issues that cause knife crime.

Finally, as the Health Secretary that secured the additional funding I can assure you and your members that I am 100% committed to it. And I see adult social care as unfinished business.

In my final year as Health Secretary I gained responsibility for social care and immediately set out the need to cap the costs of social care, so that older people never need to face the catastrophic costs of high care needs and the prospect of losing their home. I argued for this in cabinet and, having secured £20 billion extra funding for the NHS, was moved to the Foreign Office before I could push through reforms on social care funding. So as prime minister I would bring forward the green paper on social care quickly and ensure that nobody will ever face the risk of losing everything just because they have high care needs. These measures will be accompanied by support to help people save for their old age more easily, and new tax incentives which help families who want to look after an elderly relative at home.

Thanks again for your questions and do let me know if your members have any more.

On Monday I started the day at Newlyn fish market. This was the first fish auction that had taken place for a number of days due to bad weather grounding the fleet.