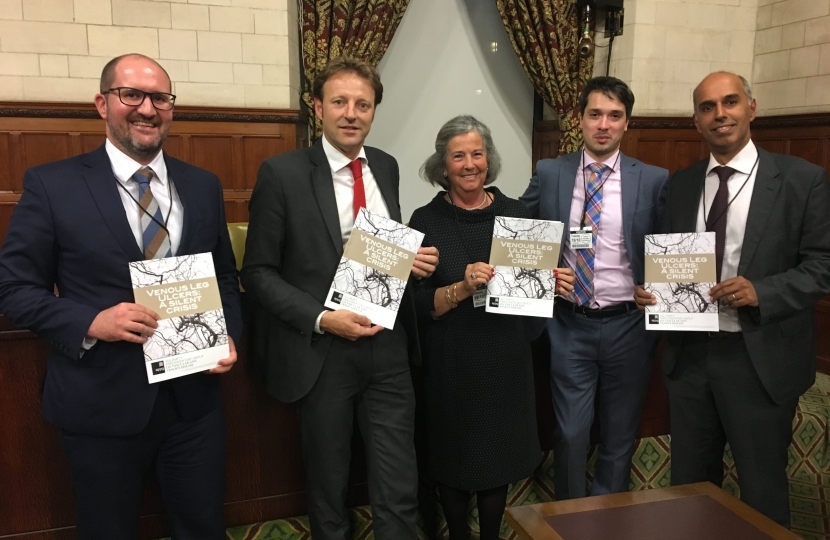 West Cornwall MP Derek Thomas is calling for major changes in the way people suffering the ‘silent crisis’ of leg ulcers are treated.

As chair of the All Party Parliamentary Group (APPG) on Vascular and Venous Disease, Mr Thomas has helped to produce a report, ‘Venous Leg Ulcers: A Silent Crisis’, which reveals that most patients are not getting the treatment they deserve.

Venous leg ulcers, formed because the circulatory system cannot move blood from the legs to the heart, cause major distress for patients - the condition is painful and socially isolating and unless the underlying health cause of the ulcer is addressed, venous leg ulcers show a high degree of recurrence.

However, although the UK spends up to £1.3 billion per year in managing venous leg ulcers, 64 per cent of clinical commissioning group’s commissioning policies were found to be non-compliant with NICE (National Institute for Health and Clinical Excellence) guidance and 75 per cent of all venous leg ulcers do not receive a comprehensive vascular assessment, as recommended by NICE.

Mr Thomas said: “Every year thousands of patients are being failed by poor treatment pathways and the APPG has heard some harrowing stories from patients of mis-diagnosis, pain and social isolation which has taken a heavy toll on the physical and mental wellbeing of vulnerable people.

“What is worse is that so many doctors and vascular experts agree on what needs to change and how to do it but currently the availability of treatment varies massively across the NHS.

“With this report, we want to raise awareness of the issues and point out that cost-effective medical solutions are available. It’s about saying let’s get on and drive change to help thousands live without pain.”

As well as the work he is doing on a national scale to highlight the issues, Mr Thomas has also sent the report to Cornwall’s commissioning body, the Kernow Clinical Commissioning Group (KCCG).

Accompanying the report, Mr Thomas has recommended that the KCCG gives consideration to the need for a network of health and social care hubs across the county.

“These hubs would greatly increase the chances of ensuring that healthcare professionals dealing with Vascular and Venous Disease are able to provide effective and uniform treatment, something that could also happen in many other areas of healthcare,” Mr Thomas added.

You can read the report here: https://tinyurl.com/y33jcmgq

Parliament is engaged in debate regarding the UK Internal Markets Bill. This Bill will ensure that all parts of the UK can trade with each other without falling foul of any tariffs or additional bureaucracy imposed by the EU if we fail to agree a Free Trade Agreement by 1st January.