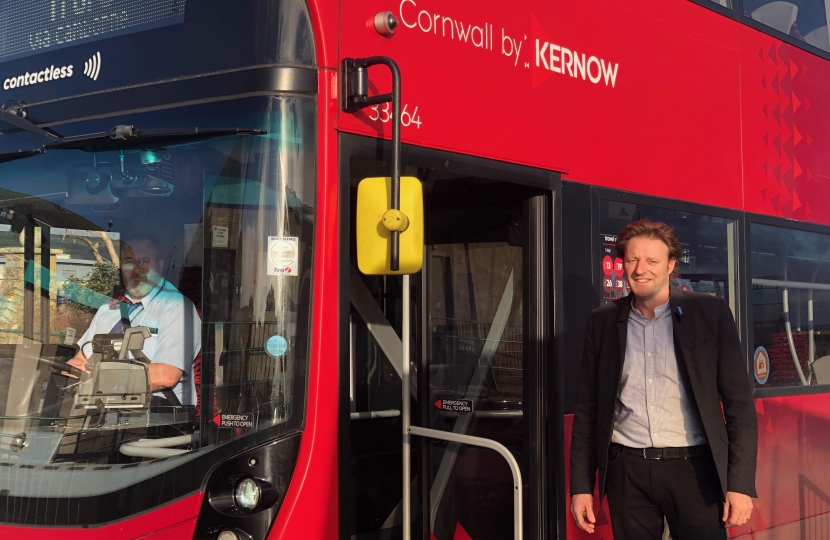 West Cornwall MP Derek Thomas is urging Cornwall Council to bid for up to £5 million of funds that could help transform the county’s public transport network.

The Government last week asked Cornwall and the Isles of Scilly to come up with projects that will support sustainable transport, in particular developing environmentally-friendly and low carbon transport systems.

Since Cornwall Council’s declaration of a Climate Emergency in January, Mr Thomas has met with Council Leader Julian German to discuss ways that the county can achieve its ambition of becoming Carbon Free by 2030 and one of the issues they discussed was public transport, especially the bus service.

“I suggested the Council undertakes a comprehensive review of public transport with the straightforward objective of ensuring that the Duchy enjoys a bus service that meets the needs of their work, family and social  requirements for a price that is genuinely affordable,” said Mr Thomas.

“I carried out a rural bus survey identifying people’s needs earlier in the year, which had a substantial response, and it was clear that the current bus service is not going to significantly reduce private car journeys.

“Cllr German and I enjoyed a very productive conversation about public transport and so I am now suggesting to him that Cornwall Council focuses on the bus network when putting forward a sustainable transport project which will be supported by up to £5 million of European Regional Development funding.

“Connecting people through a good public transport service will have numerous benefits - driving down car journeys, addressing isolation and helping to create sustainable communities – and I am recommending that Cllr German uses his influence to make buses a priority when considering this funding.”