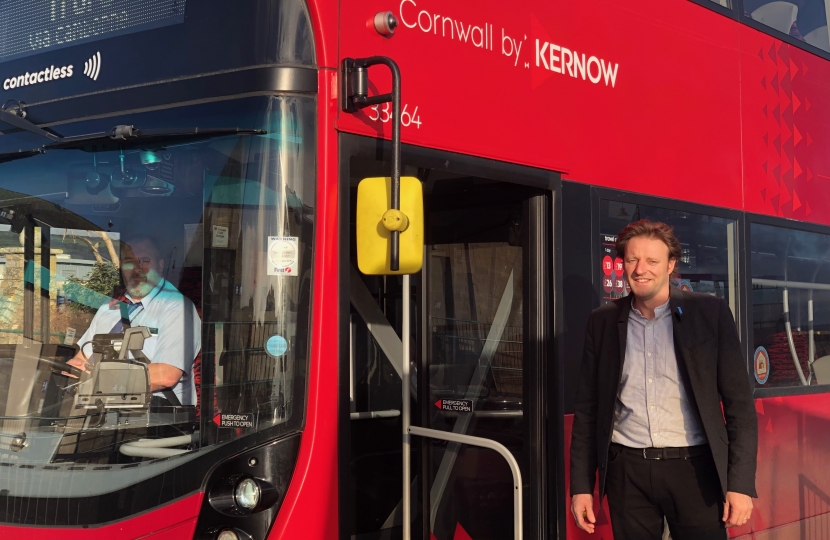 The promise of a £23.5m funding package over the next four years for a ‘Reduced Bus Fares’ pilot in Cornwall has been hailed by MP Derek Thomas as an exciting opportunity to get more people to use public transport.

During the course of the year the West Cornwall MP has met with senior transport officers and councillors at Cornwall Council on a number of occasions to discuss ways to make bus travel more available both in terms of service frequency and fare affordability.

The pilot, which will be introduced next May and is part of a £220 million package of investment in buses announced by the Chancellor of the Exchequer, will build on Cornwall’s existing One Public Transport project which aims to provide integrated public transport by joining up the bus and rail networks and bringing down fares.

If more people do travel by bus, then the plan is that over the four years of the pilot project, the lower cost of fares becomes financially sustainable. More journeys by bus means more fares being paid which means keeping fares down

“Buses will play a key role in if we want to create an affordable, sustainable public transport system,” said Mr Thomas.

“Fill a double decker with motorists and you can take 75 cars off the road but, from the bus surveys I’ve carried out in the last 12 months across West Cornwall, it is clear that the current network does not provide passengers with enough services or at a price they can afford.

“If we are serious about achieving net zero carbon emissions in Cornwall, getting more people to use public transport will make a massive difference and this pilot offers an exciting opportunity to persuade people to leave their cars at home.”