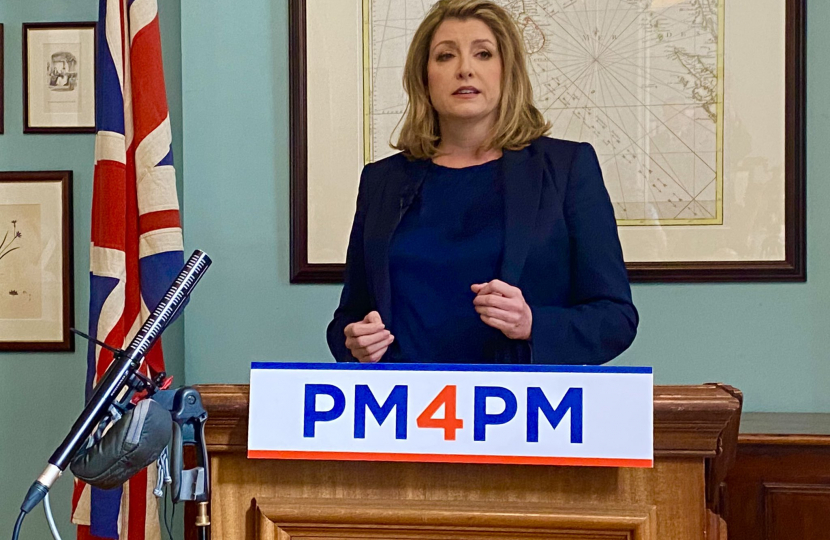 When the PM was answering to the Liaison Select Committee (the committee of Select Committee Chairs) one reason he gave against resigning was the list of pressing priorities facing No 10, including the war in Ukraine, the cost of living and economic recovery following the pandemic.

This is exactly why we need to conclude the election of a new leader and UK prime minister quickly.

I draft this on Monday before the process for this election of a new Conservative Party Leader has been confirmed and I see no reason why we can’t narrow the field of keen future PMs to two by the end of next week and then give Conservative Party members August to decide which should succeed Boris Johnson. We can have a new PM in place in September and knuckle down to continue to tackle these and many other priorities.

There is one thing about our leadership contest of which I had no doubt: there is no lack of talent and ability in the Conservative Parliamentary Party and Labour MPs have said to me they envy the talent and diversity that has made it to the ballot paper. One Labour MP said, ‘we can only do male and pale’.

I’m backing Penny Mordaunt because she is proven to be hardworking and effective in the areas of responsibility she has had in Government. Furthermore, she comes across as more committed to pursuing the greater good for people here in the UK rather than her own particular ideas and agendas. She has also set out her thoughts and ideas for the country in a book titled Greater which was published recently and makes for some interesting and stimulating reading!

It would be so easy to assume MPs time is consumed by the leadership contest. It is true these events can be distracting. However, work continued this week with the Diabetes All Party Parliamentary Group which I chair. Our discussion focused on how we address the inequalities that face those with diabetes both in relation to where they live but also their ethnicity which is stark and unacceptable. Managing diabetes is something we know a great deal about but the expertise, support and access to medical devices is certainly not universally available.

I also chaired a meeting in relation to medical devices as the Government is introducing a post-Brexit regulatory framework intended to ensure safety, access and innovation in the UK and to set out a world-leading approach to these areas.

Another area of responsibility relates to brain tumour diagnosis, care and treatment and I chaired a meeting in the Lords to progress our work on rehabilitation for children who live with an acquired brain injury post-surgery to remove a tumour. We say brain tumours are rare, but I meet so many people who have been impacted by this terrible diagnosis in their family. Early diagnosis is so important and the charity Headsmart, has launched a symptom checker to help identify the possible signs of a brain tumour much earlier. Early diagnosis can be lifesaving, but symptoms can be mistaken for other health issues at a critical time. Take a look at headsmart.org.uk

The eyes of the media focused on No 10 last week but in other news a significant development in the fight against the horrible people trafficking trade unfolded. UK’s National Crime Agency and police across Europe descended on a gang that have smuggled approximately 10,000 people across the channel over a period of 18 months. Operation Punjum led to the arrest of over 40 suspected criminals and the seizure of hundreds of life jackets and a huge number of small boats. It is an important development as it will save lives and sends out an important message that people involved in this ‘trade’ will be hunted down and prosecuted. Whatever your view on the challenges associated with immigration everyone wants to see an end to illegal people trafficking and these arrests reassure us all that police in the UK and across Europe are working collaboratively to tackle organised crime.