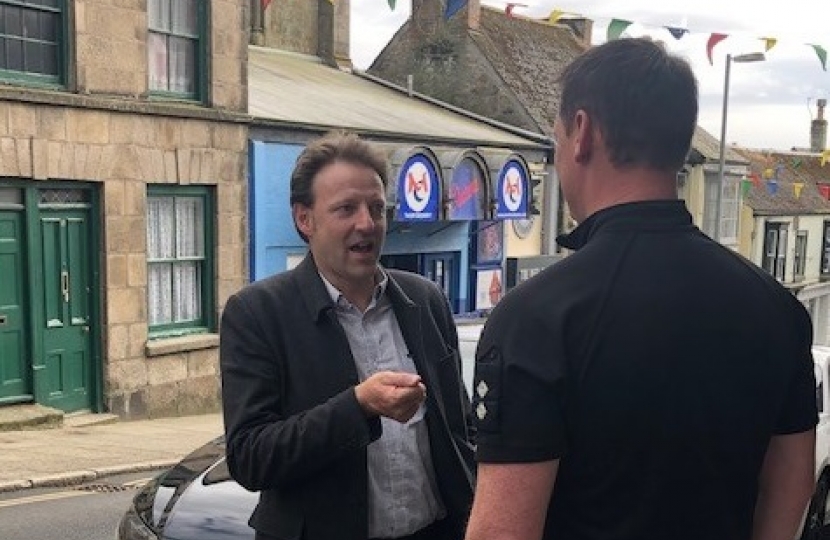 West Cornwall MP Derek Thomas is pressing the two men vying to be the next Prime Minister commit to giving Devon and Cornwall Police officers a guarantee in law they will be looked after both in and out of the job – in the same way as Armed Forces personnel are.

Mr Thomas said officers put their lives on the line each day to protect the public and they should be recognised.

He has signed an open letter to both Boris Johnson and Jeremy Hunt urging them to commit to a Police Covenant, which would recognise the risks officers take, guarantee inflation-proof pay rises each year and set out how they will be supported.

Mr Thomas said: “The police have been asked to do more with less and while the police continue to deliver outstanding service, it is time to show them we are on their side.

“Both Boris and Jeremy have spoken about the need to increase resources but I do not want to see them pay lip service to our officers, I want action.

“Since 2010 we had to make difficult decisions to rebalance the books and tackle the economic mess left by Labour, which resulted in around 30 per cent cuts in Central Government funding to police. Since then, police numbers have fallen by more than 20,000 and we need action to make up the shortfall.”

Mr Thomas said he did not want to see the contenders pluck out a number to appease police but “heal the broken bond” between police and Government but set out detailed and considered policies to support the service.

He along with more than 20 other MPs has added his name to a letter written by Tatton MP Esther McVey which sets out the demands. The MPs believe committing to a Covenant would recognise the challenges officers face and the support needed at different stages of their career; it would also offer guaranteed support to those who have suffered physical or mental injuries as part of their job.

This week the cause was backed by the national Chair of the Police Federation of England and Wales, John Apter, who said the Covenant was “an important step” towards achieving “further guarantees and protections for our dedicated officers”.

Ms McVey said she was delighted that the Police Federation has backed the idea and that MPs are on board.

“We all know the excellent work our individual forces do day in day out to protect us and it is time their hard work was recognised,” she said.

“I look forward to working with the next Prime Minister to bring it into force swiftly.

“The Police Covenant will show our commitment and gratitude to the police for what they do and it will support them once they have left the service.”