My record on climate change 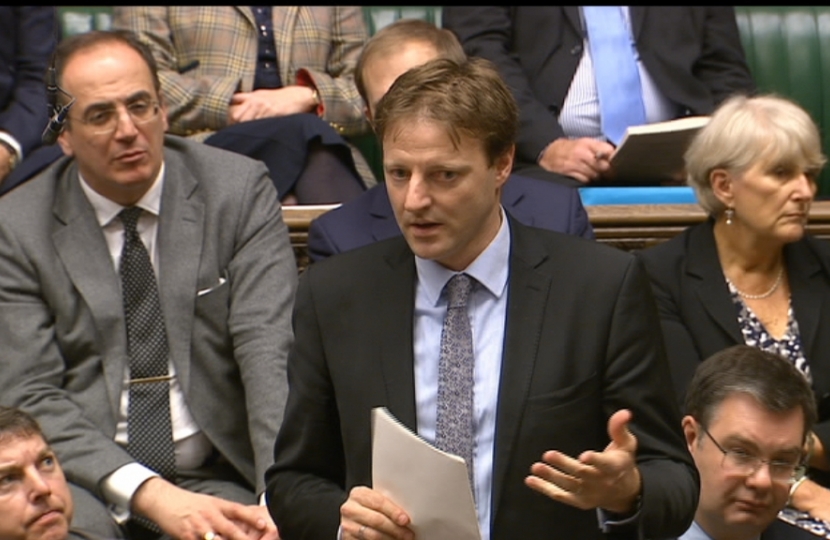 Recently I and many other Conservative MPs have been taken to task on our voting records with regard to climate change. A national newspaper claims that Conservative MPs are five times more likely to vote against climate action, a claim I feel is exceptionally misleading and does not reflect the Conservatives’ (and my) record on climate action so far.

The article examines a number of different pieces of legislation and I would argue that the votes I cast, which were supposedly against climate action, were in fact to ensure that measures designed to mitigate against climate change did not adversely affect those least able to afford it.

Subsidies used to encourage renewable energy sources such as solar and onshore wind energy reward those who have the money to put up wind turbines or solar panels on their property and this money is paid for by those less well off in the form of higher fuel bills.

In addition, a fair amount of the legislation highlighted did not represent the best value for money and there were also failures to account for future developments significantly (such as the mass rollout of smart meters and fuel-efficient cars) or explore alternatives.

I fully favour generating as much energy as possible through renewable means, which is why I promote other available schemes such as interest free loans for efficiency measures and renewable platforms to be provided for public buildings like schools, hospitals and council buildings. I have also argued that the Government extend this to private homes and businesses.

It should also be stressed that the strength of feeling and concern for the future of our planet has been acutely amplified because of the IPCC’s report of October last year that said we have 12 years to reverse a climate catastrophe but all of the votes that the article refers to took place before this IPCC report.

For my own part, I have worked closely in West Cornwall with groups such as Surfers Against Sewage and with Cornwall Council on ways to cut carbon emissions to achieve the declared net zero target by 2030.

After holding a number of meetings with senior transport officers and councillors at Cornwall Council and lobbying Government, I was delighted with the announcement last month of a £23.5m funding package over the next four years for a ‘Reduced Bus Fares’ pilot in Cornwall; this presents an exciting opportunity to get more people to use public transport.

In addition, I have launched the Woodland 2020 project which has the aim of planting 20,000 trees in West Cornwall by the end of next year – I hope to plant the first 1,000 trees next month.

In Westminster I serve on the Environment Audit Committee and have pledged my support to the Conservative Environmental Network (CEN) manifesto which outlines new policy ideas that can help us to decarbonise while protecting our precious landscapes and wildlife.

I supported the Government’s ban on microbeads which harm marine animals, a ban welcomed by Greenpeace as “the strongest in the world” and the plastic bag tax of 5p which led to 9 million fewer bags being distributed.

In April I secured a debate on the environment pressing the Government to bring forward our first ever Environment Bill – and this was included in the Queen’s Speech last Monday.

This bill will ensure that, for the first time, environmental principles will be enshrined in law while measures will be introduced to improve air and water quality, tackle plastic pollution and restore habitats so that plants and wildlife can thrive.

Legislation will also create new legally-binding environmental improvement targets and an independent regulator will be established in statute to scrutinise environmental policy and law, investigate complaints and take enforcement action.

I also welcome the news that the PM is to chair a new cabinet committee on climate change, a move designed to join up thinking across departments.

To sum up, I am proud of my campaigning for greater climate awareness and the record of this Government. I am very happy to debate the best policies to reach net zero and to have my actions regarding this most vital issue scrutinised by the media but the scrutiny must be fair.

The article, which appears in The Guardian, looks at voting records on legislation dating back to 2008.

I did not become an MP until 2015 – I therefore lay out the reasons I voted as I did for the following legislation:

The climate change levy exemption represented poor value for money, with one third of the benefit going to overseas operators. Myself and others felt that it was time to promote greater energy efficiency, as times had changed since the exemption was introduced in 2001 - renewable generation increased from 2.5% to around 20% of the UK’s electricity supply in that time. The levy exemption was no longer necessary, as more efficient and effective policies had already been put in place. It was also important to protect climate change levy revenue. The independent OBR forecasts at the time showed that without a change, climate change levy revenue would fall from £800 million to £200 million by 2020. Removing the exemption would effectively remove some £3.9 billion from this fund, which is used to improve energy efficiency, such as improving the efficiency of people’s homes.

The clause regarding vehicle tax would have compelled the Government to introduce a new Vehicle Excise Duty. But by continuing to base annual rates of VED on CO2, the proposed amendments of the Labour party would have recreated the sustainability challenge of the already existing VED system. The clause missed the evident truth that, as new cars become more fuel efficient, more and more ordinary cars will fall into the lower rate of VED bands for their entire lifetime; updates of this inefficient CO2-based VED system would be necessary at very regular intervals. Furthermore, with such a regressive measure, poorer families with older, less fuel-efficient cars would still end up paying more tax than richer ones who were able to buy a new car every few years. The changes would have ultimately made it harder and lessened the incentives for all but the richest people to purchase the very cleanest cars.

This clause of the Energy bill required the Government to draw up a carbon capture and storage strategy. This measure is costly and unnecessary. I supported and still support working with industry to bring forward innovative ideas for reducing the costs of this important technology, and support the Government investing in a CCS/ CCUS on its own terms, through innovation support, international partnerships and industrial research projects. I was encouraged in February when the Drax power station in North Yorkshire became the first in Europe to capture carbon dioxide from wood-burning, and I am also pleased that the Government’s CCUS Action Plan published in November 2018 confirms that it will shift its focus to domestic deployment, enabling the development of the first CCUS facility in the UK, commissioning from the mid-2020s.

This would require the Secretary of State to set a decarbonisation target range for the electricity generating sector. The Government is committed to ensuring that the UK continues to play its part to tackle climate change, in line with the Climate Change Act and our international and EU obligations. However, this needs to be as cost-effective as possible in order to keep costs down for families and businesses while delivering on legally binding commitments. We cannot do that by locking ourselves into additional expensive and inflexible targets relating to the power sector. There are too many things we cannot predict about how the energy system will develop over the next 15 years and beyond. The costs of getting this wrong now would be picked up by families and businesses for decades to come. It is already worth pointing out that there are legally binding commitments to decarbonising our energy supply – last year more energy was generated cleanly than through fossil fuel power plants. We are on course to close coal fired power stations by 2025 and a quarter of our energy will be generated by wind power alone by 2025. More progress has been made in the UK energy sector to reduce carbon emissions than most other western countries.

This vote was to delay subsidy cuts to onshore wind. Onshore wind has deployed successfully to date. As a result, it is the cheapest form of energy so there was no need to continue subsidizing the generation of it. Furthermore, the subsidy mechanism enables the rich to get richer, and makes the poorest poorer. Let me explain: if you have money you can pay to install wind turbines or some other form of renewable energy platform on your property or on your land. Under the scheme, you would then be rewarded generously for the energy you generate for the grid. If you don’t have money, your energy bills increase in order to reward those that do have money. I fully favour generating as much energy as possible through renewable means, which is why I promote other available schemes such as interest free loans for efficiency measures and renewable platforms to be provided for public buildings like schools, hospitals and council buildings. I have also argued that the Government extend this to private homes and businesses.

Concerning Heathrow expansion, this was a policy statement – it does not serve as a ‘final say’; it merely set out policy against which a promoter of an expanded Heathrow airport could deliver a more detailed design and participate in the planning process, in a manner that will now comply fully with the net zero goals of the Government. Heathrow will need to undertake a thorough assessment of the air quality impacts of its scheme, and bring forward an appropriate package of mitigations to demonstrate compliance. Therefore, my support for an expansion (which would create jobs, improve access to foreign markets and ease congestion) was made in the full knowledge that any eventual undertaking would respect the legislation set out in the Climate Change Act of 2008. I was joined by a significant number of members from both sides of the House in expressing such views.