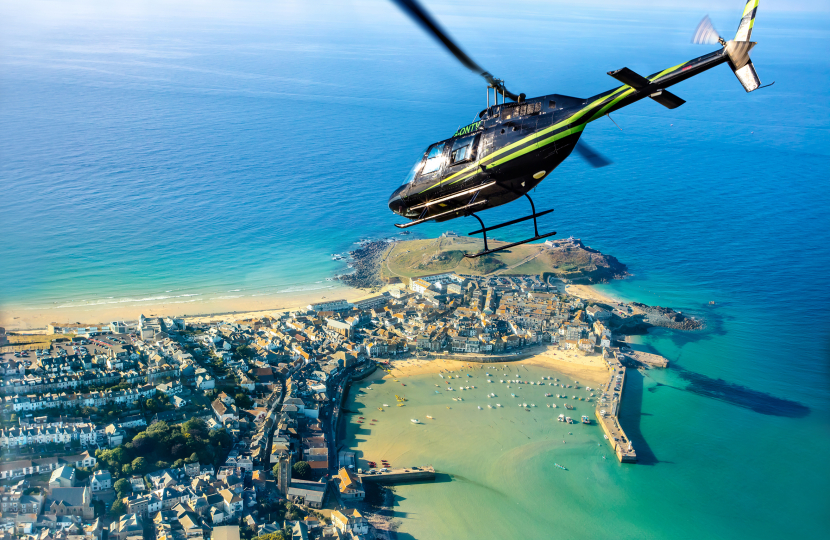 As Cornwall has become an even more attractive destination we have adjusted to the increase in traffic and population and found ways to carry on our work and daily activity more or less. We recognise that visitors can share what we enjoy all year round and the money tourism brings makes an important contribution to our economy. But I think it is reasonable to draw the line somewhere in terms of what residents should expect to tolerate and the Adventure Experience 001 helicopter rides that have dominated the skies around St Ives over the past two weeks has crossed this line.

These helicopter pleasure rides have triggered emails and complaints every year but this year the disruption and intrusion suffered by large numbers of people over a large area is no longer acceptable.

Over the years I’ve explored with Cornwall Council and St Ives Town Council what powers are available to them to reduce the negative impact on the lives of residents and livestock.

After various correspondence back and forth and with Government departments, we have concluded that only a change in the Town and Country Planning General Permitted Development legislation will ensure an operator, wanting to provide pleasure flights in a field near you, is required to apply for permission. Once this is the case Cornwall Council could determine and regulate the impact on people's lives and refuse permission if unacceptable noise levels can’t be managed.

Early this year I explored how people felt about these flights, deliberately choosing a time when the flights themselves were a distant memory. I wanted to ascertain whether there was an appetite for a change in the law. Even then, of those who lived in the area, over 90% described the flights as a nuisance and 91.7% supported a change in the law to give Cornwall Council powers to regulate the flights. I’ve already fed these results to the new Secretary of State, Greg Clark, as Michael Gove, who previously held responsibility for this is no longer in post. I’ll also find ways in Parliament to raise this issue to drive a change in permitted planning laws.

All of us are facing bigger bills for our energy and food. We can bring energy bills down by reducing demand for oil and gas. To do this we should ramp up renewable energy production, drive the development of modern nuclear power such as the Small Modular Reactors, improve the efficiency of our homes and manage energy use better.

However, food bills are much more difficult because for decades our supermarkets have driven down the price of food at the expense of our farmers and food producers. We want our farmers to produce the highest quality and care for our countryside. Every farmer I meet wants the same but, even with the price increases we see on supermarket shelves, the money to farmers is not keeping up with their cost of production. Paying a fair price to farmers for our food must become the standard if we want to farmers to feed us!

Over the Summer I met with the Bishop of Truro, Philip Mounstephen. Our paths crossed leading up to the G7 Summit in Carbis Bay and through his work on Freedom of Religion or Belief in which I have take a keen interest. Hugh Nelson, the Bishop of St Germans, joined us and we met because I had flagged a concern about the perceived retreat of the Church of England from rural parishes in West Cornwall. Over the years I’ve met several fantastic rural clergymen and women and believe very strongly that the CofE holds an important opportunity and responsibility for the spiritual well-being of people living in our rural communities. As clergy move on or retire, which has been the case in many parishes across West Cornwall recently, it is easy to see why these men and women are not immediately succeeded. The challenge of keeping large churches with active congregations at a time when church attendance and church engagement has declined dramatically over decades cannot be overstated and without active congregation's clergy wages are hard to come by! I left the meeting encouraged for the future of the CofE in Cornwall and on Scilly. Not because everything is sorted, and the church will be staffed and open indefinitely in your village whether people attend or not. Rather, by the work that has taken place entitled ‘On the Way’ where church members across a deanery have considered how the CofE should be ‘fruitful’ and ‘sustainable’ and continue to offer a home for everyone who wants or needs it. CofE members will know that a number of clergy men and women have retired or moved to new pastures, and few have been replaced. However, I’m told that there is an interest, following the ‘On the Way’ initiative, amongst clergy men and women to locate to Cornwall so there is reason to be reassured that the Church of England still offers a place for those who want a spiritual home across rural Cornwall. Faith and politics are not necessarily easy bedfellows, but I take seriously the role the church and people of faith have in our West Cornwall and Scilly communities. You can visit the Truro Diocese website to read more about ‘On the Way’.

I was made aware of an ‘open letter’ from Labour councillors to Cornwall’s MPs this week by the media. The subject matter is about the cost of living and, whilst this letter is little more than a publicity stunt, it gives me the opportunity to remind constituents living in low-income homes in particular they will receive further financial support as the year goes on.

In addition to this, I’ve joined forces with Cornwall Councillors representing Helston and the surrounding area and the Town Council, to host a ‘Cost of Living’ event on Friday September 16th. This event will bring together a number of organisations that are in a position to help, advise and support people over the coming months. The intention is to repeat the event in other towns in my constituency.