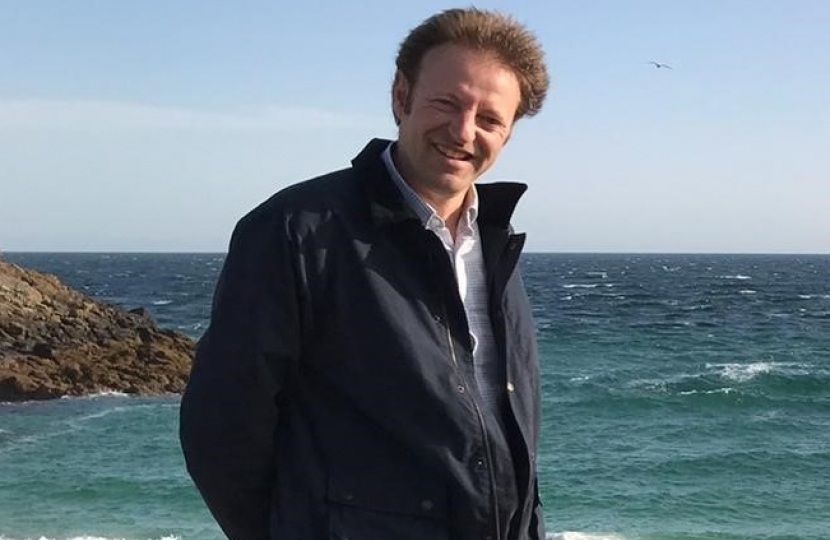 There is plenty going on in Parliament and an opportunity for readers to engage if this sparks an interest!

On Tuesday I spoke in support of our inshore fishing fleet, and I was privileged to meet with many recently to discuss their concerns. In my speech I argued that our fishermen were critical to the Government’s food strategy as we seek to maximise locally sourced nutritious food. Instead, our fishermen are tangled in red tape - rules that do not necessarily support sustainability or safety at sea. Government needs to streamline fisherman’s reporting obligations, combine the functions of IFCA and the MMO, introduce consistency in safety code inspections, ensure the IVMS system is affordable and reliable, scrap quotas for the smaller inshore vessels and protect the industry by stopping massive freight vessels from charging through known fishing grounds close to land off the Lizard Peninsula.

This takes me to the Government’s food strategy, and it is fair to say that the proof of the pudding will be in the eating of it! I’m hopeful that the programme of incentives, additional visas and investment in research will reduce our reliance on imported food and inspire an interest in people who could find a satisfying and rewarding career in fishing, farming, and food production. The Conservative Government has promoted local sourced food to be used in the public sector. This is worth billions of pounds, and the strategy commits to 50% of food used in public procurement to be sourced locally. You can have your say: https://consult.defra.gov.uk/public-sector

A hot topic is housing, and I used the debate on the Levelling Up and Regeneration Bill to continue to press for powers for councils to restrict new homes for permanent residents, change the affordability methodology for mortgages to allow rent payments to demonstrate that mortgage payments are affordable, and for the Government to accept in full the Healthy Homes Principles found at https://tcpa.org.uk/the-healthy-homes-act/

This is your last chance to complete the NHS Dentistry survey I launched earlier in the year. I have secured a debate to press the need to speed up reform of the NHS Dental Contract. It is the only way to restore dental appointment for those who need them. Progress is being made and I’m receiving emails from constituents who have now benefited from our campaign, but we cannot rest until NHS dentistry is available when it is needed. My survey is as follows: https://www.derekthomas.org/dentalservices

The Government is being accused of potentially breaking international law by fixing the Northern Ireland Protocol and free up the movement of goods between Great Britain in Northern Ireland. Northern Ireland should not be expected to accept the current arrangements and should not be the pawn used by Brussels and Great Britain in some political positioning exercise. The UK and Brussels have suggested a similar solution. UK - a Green Lane for goods between GB and NI and a Red Lane for goods to and from the EU which will be subject to greater checks. Brussels - an Express Lane between GB and NI so it is political posturing that needs addressing as much as anything. The draft legislation presented to Parliament is intended to force the issue!

It is a privilege for me to have the opportunity to populate this section of the Voice each week and I tend to cover local and UK centric issues that I believe are of interest or concern. And there is always plenty to cover. However, as this week is the week Government releases its long-awaited food strategy, I want to pick up on a global food shortage that is truly horrendous.

I suspect many people will ignore it and choose to think about other things simply because the scale of the hunger today is already so great there is little that individuals can do to alleviate the situation other than to feel miserable. However, I want to set out how severe the situation is because it gives context, I believe, to some of the challenges we face in the Western World and because we share a concern for those less fortunate.

Today 276 million people are acutely food insecure and in need of urgent food, nutrition and livelihoods assistance. David Beasley from the UN World Food Programme described the situation as 276 million people marching towards starvation. Of the 276 million there are 48.9 million people across 48 countries just one step from famine. 730,000 people are in a catastrophic condition of hunger. These figures are double what there were before the pandemic and the pandemic, rising costs and the war in Ukraine has triggered this rapid increase in severe food shortages in the poorest countries.

There is little we can do as individuals, but the UK Food Strategy must lead to us growing as much food as we possibly can to reduce demand on imports. We must also cut food waste including on farm caused largely by labour shortages and reduce waste in the processing and retail sector and of course, reduce food waste at home. The Government should restore overseas aid levels and we need a much more concerted effort to get the millions of tonnes of wheat, sunflower seeds, rapeseed, and barley out of Ukraine. As we double down to support UK families and residents with rising energy and food costs, I sincerely hope that we don’t inadvertently hasten global food insecurity. It is the last thing any of us would choose to do!

The Royal Cornwall Show was a triumph and I want to thank all those who helped organise it and exhibited at the show. It is a fairly unique undertaking as the show celebrates the best of our heritage and core values as well as embracing the latest development and technology. You could draft a pretty good food security strategy just by using the expertise found at the show! The weather did not disappoint as on Thursday (when I attended the show) we also enjoyed a combination of sunshine and rain which any farm needs to grow crops!  Having the future King and the Prime Minister taking time to visit the show on the Friday also helped to promote the best of the Duchy which is never a bad thing!