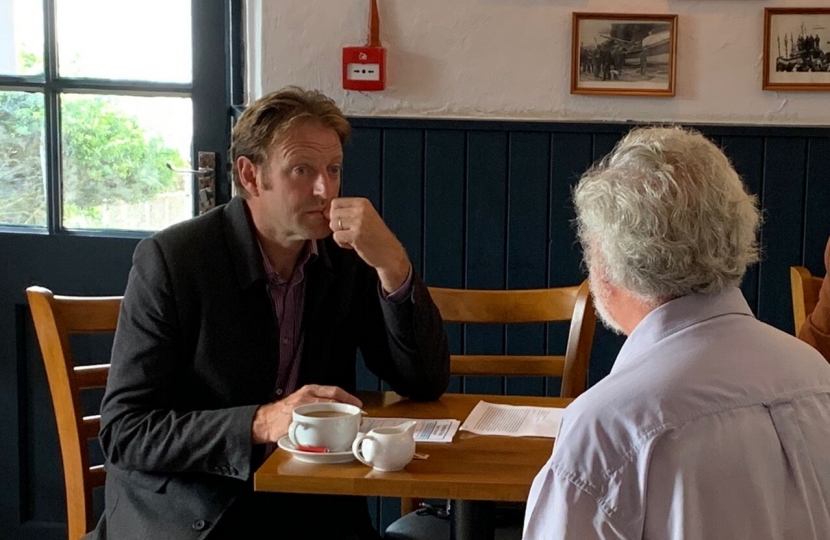 Cornwall was to be the centre of Government attention in relation to Housing with a visit by the Secretary of State for Housing, Communities and Local Government on Friday. This would of course have been Robert Jenrick and his visit followed months of close working between the Cornwall Council Cabinet, Senior Council Officers, Cornwall’s MPs and Robert’s Department.

Finding a way to ensure Cornwall’s residents have access to the housing we need in the places we need them is a complex picture and will take a multi-pronged approach to adequately address the challenge.

Robert was due to make some early commitments to be included in the emerging panning legislation reform which I believe would have assured us all that the housing difficulties we face are understood and are being confronted.

Robert Jenrick’s visit was not to be as he now sits on the back-benches alongside me but we face a delay rather than a step-back in terms of tackling Cornwall’s housing problems through Government legislation.

There is no reason to be disheartened as Cornwall Council will continue its work as will my colleagues and I to ensure that the tools we have at our disposal today are effectively utilised. For example, after May’s local election we discovered approximately 160 council-owned houses that were empty and significant sums of cash, secured from central government for housing, unspent! Many of the houses are now occupied and extraordinary effort is being applied to deliver the local housing Cornwall needs.

If people were unsure whether housing was seen as a priority for Government hopefully the Prime Minister’s intervention by installing Michael Gove in the post will settle these doubts. Michael has the ability to understand the challenge and apply clarity of thought to the solution. We will engage his services early in his tenure on behalf of Cornwall to announce the Government’s plans to give Cornwall’s residents secure homes to live in!

Planning Enforcement is also a key part of the reform underway and it is a hot topic across Cornwall. The revived enforcement against Carbis Bay Hotel is an example of why these powers are needed but the powers, as they stand at the moment, are compromised by the threat of long-winded expensive legal challenges. An aspect that takes the sting out of planning enforcement and is slowly exasperating communities as they see individuals flout planning law and seemingly get away with it.

I’ve been working with Parish Councils to understand the extent of the difficulty and have proposed some simple changes that will act as a deterrent to those who have no respect for the planning process. For example a simple ‘on-the-spot’ fixed penalty for both the ‘developer’ and the contractor for work that clearly needed planning approval would discourage much of the breaches my office is currently working through with the Council. The way we provide homes is in need of reform and I welcome the fact that we have one of the Government’s most effective figures in charge.

This week in Parliament the EFRA Select Committee (Environment, Food and Rural Affairs), of which I am a member, took evidence from Henry Dimbleby, author of the far-reaching National Food Strategy.

Michael Gove commissioned this report during his time as Secretary of State for Food, Rural and Rural Affairs. Henry’s report intends to apply joined up thinking in relation to food, environmental and animal welfare standards and our health. The report was written during the early part of the pandemic and captures the need to secure food supply and ensure that children in the poorest families are not left behind. During the pandemic the sector moved heaven and earth to ensure there was enough food to go around and a similar effort is likely to be needed this winter.

A National Food Strategy, if delivered, will iron out the risks we have recently identified in relation to food supply and security. Henry went to great lengths to make the case for a Land Use Framework which would identify what land across the UK should be used for the varying demands we place on our natural environment such as food production, carbon sequestration, biofuel production for example. Securing this land to meet our current and future needs is critically important so a land use framework and some joined up thinking in Government can not come soon enough.

Henry spoke with enthusiasm for the UK fishing industry exasperated that we export so much fish caught in our waters and then import large quantities of fish for our domestic market. The pandemic has helped to increase the domestic market for UK fishermen but there is clearly much more to do. The strategy also seeks to drive down foods with high sugar and salt content without driving up the cost of food, reversing the trend away from prepared meals with poor nutritional value.

The Government is expected to bring forward its response to the National Food Strategy in the near future.

Next week the ‘drop-in’ surgeries continue with 8.30 - 10am at St Ives Library on Monday and 10am at Sennen Farmers Market for two hours on Tuesday. These are your opportunities to raise any idea, concern or issue in an informal and a non-private setting. For a traditional ‘MP surgery appointment’ please contact the office on 01736 363038 or derek.thomas.mp@parliament.uk.