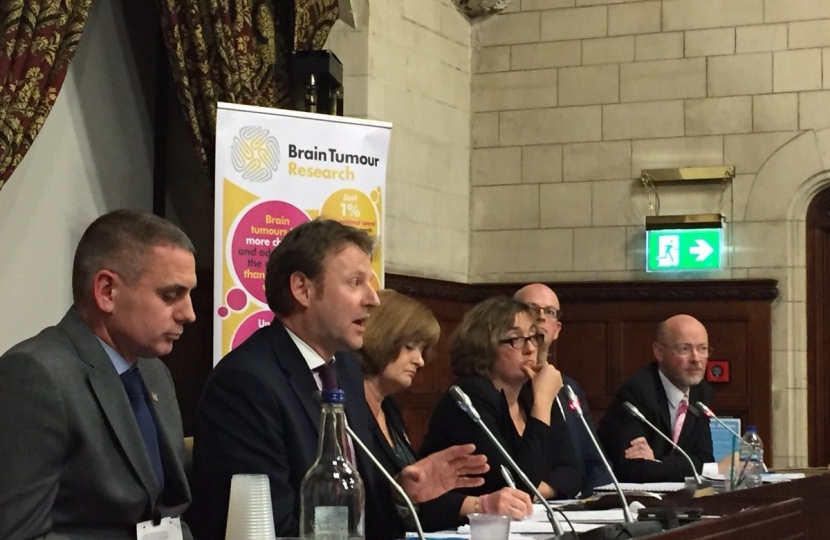 Derek Thomas chairs a meeting of the Brain Tumour APPG before the pandemic.

West Cornwall MP Derek Thomas has issued a heartfelt plea for the Government to increase funding for research into one of the most aggressive cancers.

Mr Thomas, who chairs the All Party Parliamentary Grooup (APPG) on brain tumours, was speaking at a parliamentary debate on research into childhood cancers triggered after a petition organised by Scottish grandmother Fiona Govan was signed by more than 100,000 people. Her grandson, Logan, died of a particularly virulent cancer – DIPG – at the age of just nine months.

Mr Thomas said: “When a family is told a child has DIPG they don’t have to search far to learn that just 10% of children diagnosed with DIPG survive up to two years following a diagnosis. Just two per cent make it to five years from diagnosis.”

He added that this prognosis had not improved since the APPG was established in 2005 but recently, a British-based company, MidaTech, has seen encouraging results from a study into patients with DIPG at the University of California.

“In a cohort of seven children with DIPG taking part in a clinical trial where the drug is delivered directly to the brain via a catheter we were told that five of the seven survived beyond 12 months and three continue to be monitored,” he added, pressing the Minister to investigate why Midatech was having to run its clinical trials in the USA.

Mr Thomas concluded: “In our work at the Brain Tumour APPG we have repeatedly been told that there is a lack of research and clinical trials in the area of brain cancer.

“This can only be properly addressed if we build the skills and expertise base which is very hard if Government is not proactively promoting and funding this research.

“With the right drive and commitment from Government we can hope to increase the numbers of researchers and scientists and we can then increase the likelihood of effective treatment to the most aggressive of cancers.

“The most powerful lesson I’ve learned since joining the Brain Tumour APPG is that what motivates people is the desire to ensure others are spared the experience they have endured.

“I hope the Minister will do everything in her power to ensure families such as Logan’s have reason to hope and reason to expect.”

Responding at the end of the debate, Health Minister Jo Churchill said that the 'most pernicious' cancers, such as DIPG, remained a deadly threat and that research must continue and intensify.