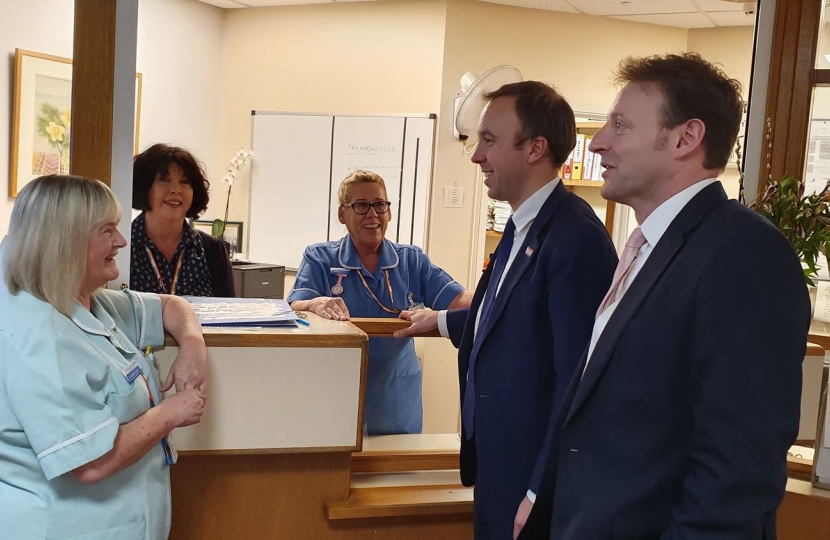 Health and Social Care Secretary Matt Hancock pledged his commitment to Helston Community Hospital on a visit with Derek Thomas, the prospective Conservative candidate for West Cornwall & the Isles of Scilly.

Mr Hancock was given a tour of the hospital by Matron Lynda McHale and thanked staff for their efforts while listening to a number of issues including the need for greater integration of services, more investment in the hospital and local community and the difficulty of ensuring the hospital was properly maintained.

Mr Hancock said he was ‘a massive believer in community hospitals’ and that he was backing Helston Community Hospital.

“A lot of the support and investment going into health services in West Cornwall and on Scilly is down to him.”

Mr Thomas said he was delighted that the Health and Trade Secretary had visited Helston.

“This hospital is a really good example of how NHS services can be delivered in one place and in the local community,” he said.

“Matt Hancock’s commitment to community hospitals as hubs for health and social care is in keeping with what I have been campaigning for since I first stood to become MP.”

Dr Ken Whittle, the president of the hospital’s league of friends, said it had been a great opportunity to meet the Secretary of State.

“It was wonderful to have a chance to explain to him some of the difficulties we face at the hospital as well showing the good work which goes on here,” he said.

“He was very attentive and had a great interaction with the staff when they met.”