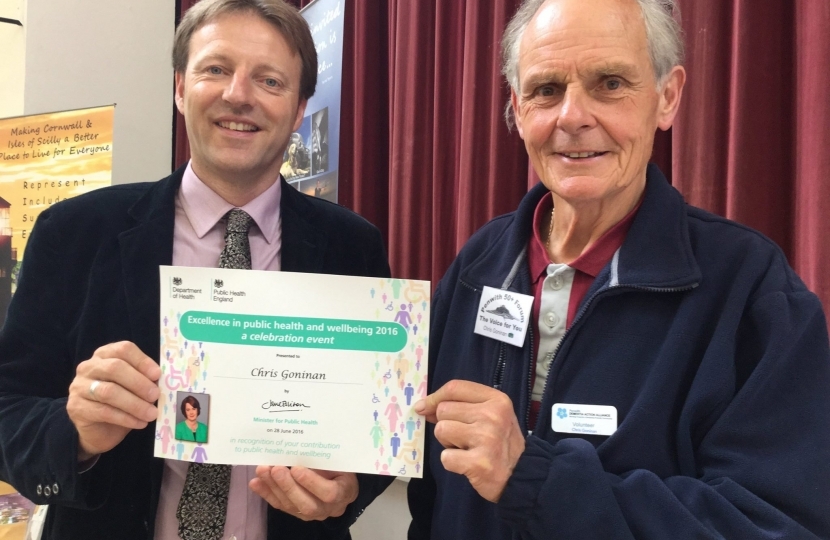 Derek Thomas presents a Department of Health award to Chris Goninan in 2016 for his contribution to Public Health.

MP Derek Thomas is backing a heartfelt plea made on behalf of elder folk in West Cornwall for the Government to take back responsibility for the over 75 free TV licence.

Chris Goninan, chair of the Penwith 50+ Forum which helps more than 100 elderly people in the area, has written to the Prime Minister urging him to do whatever is necessary to maintain the free TV licence for over 75s after 1st August – the date the BBC has announced as when they plan to end free licences for those not having Pension Credit and other concessions.

“The average age of Penwith 50+ Forum members is around 83 and many live alone as they have lost their partners,” said Mr Goninan.

“In the UK there are 2.2 million elders over 75 living alone. They all rely on their TV as the ever-present companion in the corner of the room.”

Mr Goninan added that many people who are entitled to Pension Credit do not get it because they have not applied - recent figures show that 40% of those entitled do not claim it, meaning up to 1.3 million will not receive the free licence.

For these people, he added, “the box in the corner is their main friend and if that is no longer available, then it is inevitable that loneliness and isolation develops, which may result in mental health problems and its implications for the health service”.

“The loss of the licence will have an extremely detrimental impact on their quality of life and they deserve better than this.

“The Government needs to take back responsibility for the over 75 free TV licence. It is these 1.3 million who qualify but are not getting Pension Credit that will need their support.

“These are very independent, proud people who do not want to make a fuss.  They are some of the most vulnerable in our communities and I call upon the Government to take back responsibility for the licence.”

Mr Thomas said he was supporting Mr Goninan in any way he could: “I’ve known Chris for a very long time and he does a tremendous job supporting vulnerable, older people in West Cornwall through the work of the 50+ Forum and in other ways.

“I have consistently argued that the TV licence should be free for everyone over the age of 75 and have written to the BBC’s director general saying that people who have worked hard, paid taxes and contributed to society for many years deserve the security of knowing they do not have to find the money for a TV licence whatever their financial status.

“However, given the BBC’s unfortunate decision to take away the free licence, the Government must now step in to ensure that it remains.”