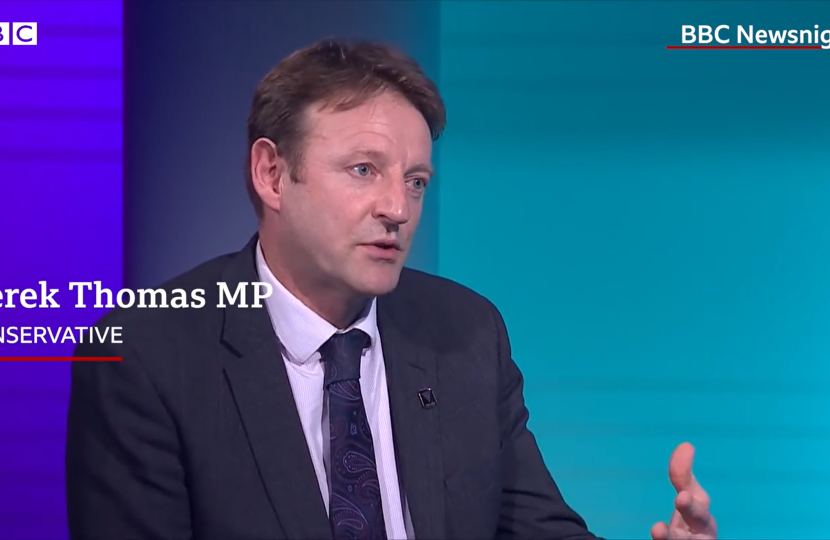 Derek Thomas has spoken out against the new Covid restrictions introduced by the Government, and voted against the introduction of vaccine passports and compulsory vaccinations.

In the House of Commons yesterday, MPs debated new restrictions proposed by the Government, including the introduction of Covid passes for venues and mandatory vaccines for NHS workers.  The Government’s new rules were supported by the Labour party, and so the only scrutiny of the Government’s proposals came from backbenchers from across Parliament.

The government is introducing vaccine passes for nightclubs and other large venues, despite the evidence from Scotland that they neither stop the spread of Covid or drive uptake of vaccinations.  Derek has constantly opposed vaccine passports as a divisive measure with negligible public health benefits.

The government is also introducing mandatory vaccination for NHS workers without carrying out a full assessment of any staffing shortfalls that could arise.  Some estimates are that the NHS could lose 70,000 members of staff, just at the time that they are needed most.  Again, there is no evidence that vaccinating NHS workers would have any effect on the spread of Covid.

The management of public health during the pandemic is a matter of balancing different factors.  Derek has always recognised the need to take appropriate action to protect vulnerable people, but is concerned that the Government is ignoring those who are particularly affected by restrictions.

Derek told the House of Commons:

“We seem to have a Health and Social Care Department that is consumed by covid and has abandoned all other responsibilities, such as mental health, cancer, diabetes, social care, loneliness and isolation—a Department that is prepared to sack the NHS staff who care for patients.

“I heard the Secretary of State say that these measures will keep people safe and protect our liberties, but I am worried because that same care and compassion and support for the NHS does not seem to extend to other severe difficulties that our constituents face largely because of the Government’s having imposed restrictions to fight covid.”

“My motivation in speaking was to give voice to those who are not heard in this debate – people with learning difficulties who have lost their whole social network, cancer patients who are not being treated, children whose schooling is disrupted.

“Sometimes a public health emergency may outweigh their rights to a full life.  But the Government needs to prove that case – and, at the moment, they have not.”