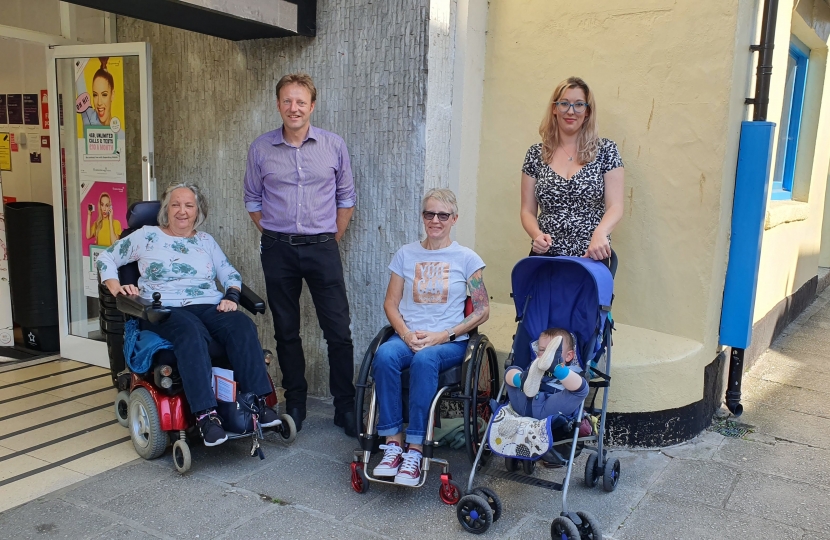 Small shops are missing out on large sums of customers' cash because too many wheelchair users, people on motorbility scooters and parents with prams find the task of navigating high street shops a step too far.
The 1995 Disability Discrimination Act was the culmination of a public campaign in which at least 100,000 people took part in demonstrations, to force the Government to end state and business discrimination against disabled people.
With the 25th anniversary of the act next year, West Cornwall MP, Derek Thomas believes that now is the time to look again at what needs to be done to improve access to our towns, including Helston, by pushing for Government funding to open up our towns to everyone.
Mr Thomas spent an afternoon in the town with Penny Stevens and Andrea Western, both wheelchair users and Eleanor Batley with her young son in a pram.
“It brought it home to me once again how inhospitable our town centres can be and how much income is being lost because we have not done enough to give access to town centre shops,” he said.
“There are around 1.2 million wheelchair users in the UK alone. It should be possible to do more to unlock the spending power of these people at the same time as drastically improving their ability to enjoy the high street.
“There were some excellent examples of the lengths some owners have gone to but the reality is that small shop owners are faced with difficult steps and entrances to overcome, often with absent landlords to add to the mix.
“If we, as a great country, care about this issue, Government money is needed to make every improvement that is practicably possible and I intend to use the 25th anniversary of the Disability Discrimination Act to highlight the need for Government intervention."