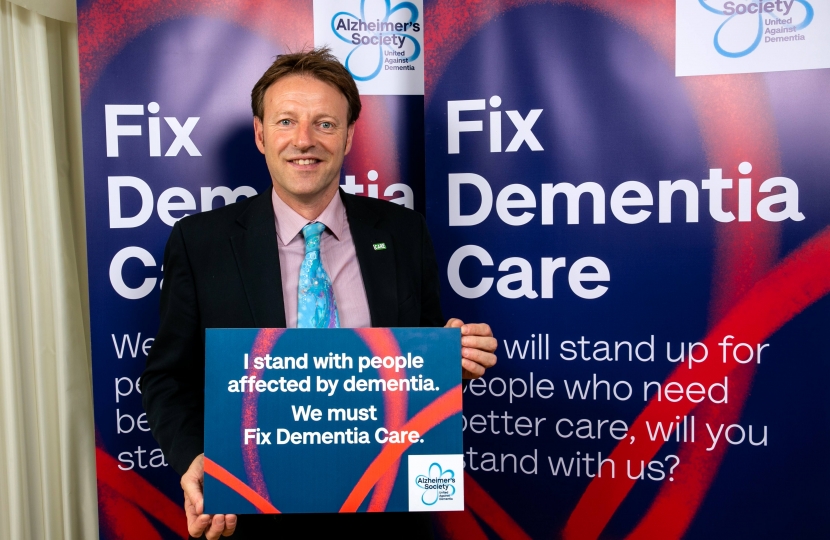 On Tuesday 9th July, Derek Thomas MP for West Cornwall and the Isles of Scilly (St Ives) joined 120 other Members of Parliament at an Alzheimer’s Society photography exhibition to showcase the human cost of the dementia care crisis.

The photo exhibition, 'Dementia Care: The Crisis Behind Closed Doors', depicts the human cost of a care system that is unfair, unsustainable and in urgent need of reform up and down the country.

At the exhibition, Parliamentarians met with people affected by dementia to hear about how the dementia crisis has affected them and their families.

Alzheimer’s Society is calling for a Dementia Fund in the upcoming Spending Review to end the dementia penalty, bringing fairness into the system and improving quality of care.

Responding to the Alzheimer’s Society event, Mr Thomas, said: ‘I am proud to stand with people affected by dementia and make the case for more funding for dementia care in the upcoming spending review. One million people will have dementia by 2021 and it is vital that we are able to deliver high quality dementia care to everyone that needs it.”

Sally Copley, Director of Policy, Campaigns & Partnerships at Alzheimer’s Society said: ‘It is fantastic to see MPs from across parliament coming together to champion the voices of people with dementia and call for reform. We urge the next Prime Minister to make addressing the dementia crisis an urgent priority. The injustice of people battling to get the care they so desperately need, while also battling the devastating effects of dementia, must be addressed now. We must Fix Dementia Care.”