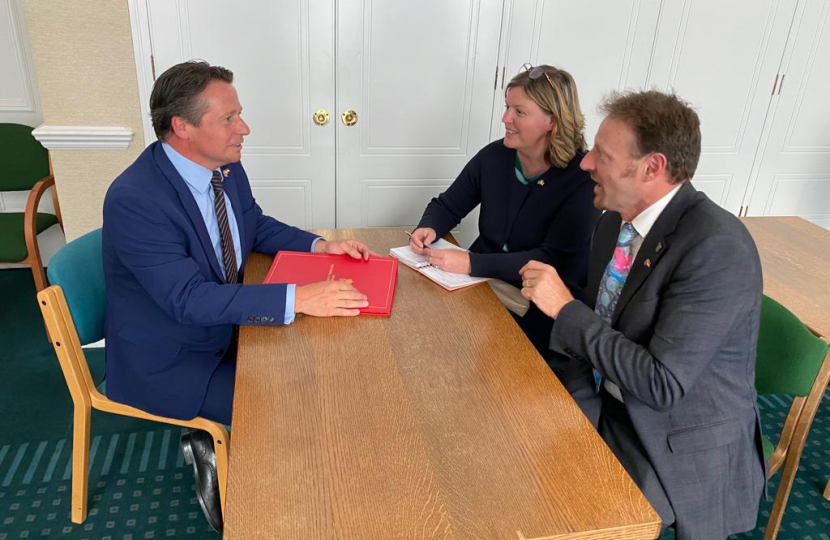 Derek and fellow Cornish MP Cherilyn Mackrory yesterday (28 June) met the Tourism Minister to discuss the adverse impact of holiday lets on Cornwall.  The Government has agreed to launch an open call for evidence on the effect of the recent increase in short-term holiday lets.

These holiday lets are concentrated in tourist hotspots – such as St Ives and Mousehole in Derek’s constituency – and have put additional pressure on the housing market in these areas, by reducing the supply of houses available for long-term rent or purchase and raising prices.

The effect on the communities is profound: the fewer permanent residents there are, the less viable are local services such as schools, pubs, GP practices, post offices and bus routes.  Residents in towns with high numbers of holiday lets have raised concerns about anti-social behaviour including noise, waste and drunken behaviour.

Derek has been raising the problems of holiday lets since he was elected – in 2018, he secured an Adjournment Debate on the difficulties that second home ownership and the holiday let industry place on families who need affordable homes – and has regularly raised the issue with ministers and in Parliament.

In a debate on affordable housing in 2021, he told the Government that the situation was now urgent:

“In the past couple of years, because of the need for staycation and inability and sometimes reluctance to fly abroad for holidays, we have seen people flooding into tourist attraction areas and driving up a holiday let market that has seen large numbers of families evicted from their homes, which they have sometimes rented for many years, and these homes transferred a holiday lets. We would therefore like the Government to intervene.”

The Government has now agreed to conduct a review into the effect of short-term holiday lets, and will seek to improve the holiday letting market for those living in popular tourism destinations.

The call for evidence will allow the government to gather the evidence and data to inform any future steps and it wants to hear the views of all parties, including hosts, online platforms, accommodation businesses and local authorities.

“We want to reap the benefits of the boom in short-term holiday lets while protecting community interests.

“While no decisions have been taken, this review will help us work out the options to look at so we can protect our much-loved communities and thriving holiday industry.”

“We need to make sure holiday lets don’t drive residents out of their communities.

“We are already taking action to tackle the issue of second and empty homes in some areas by empowering councils to charge up to double the rate of council tax.

“This review will give us a better understanding of how short term lets are affecting housing supply locally to make sure the tourism sector works for both residents and visitors alike.”

“I would urge everyone affected by the increase in holiday lets to make their voice heard in this survey.

“There is nothing wrong with the principle of Airbnb – I’ve spoken to a number of people in the constituency who earn extra money letting out spare rooms – but the holiday let market has grown out of control.

“The Government has already committed to introducing a National Landlord Register – in the Levelling Up White Paper – and we need to make sure that the Minister for Tourism works with the Department for Levelling Up to develop a scheme that works for everyone in our communities.”