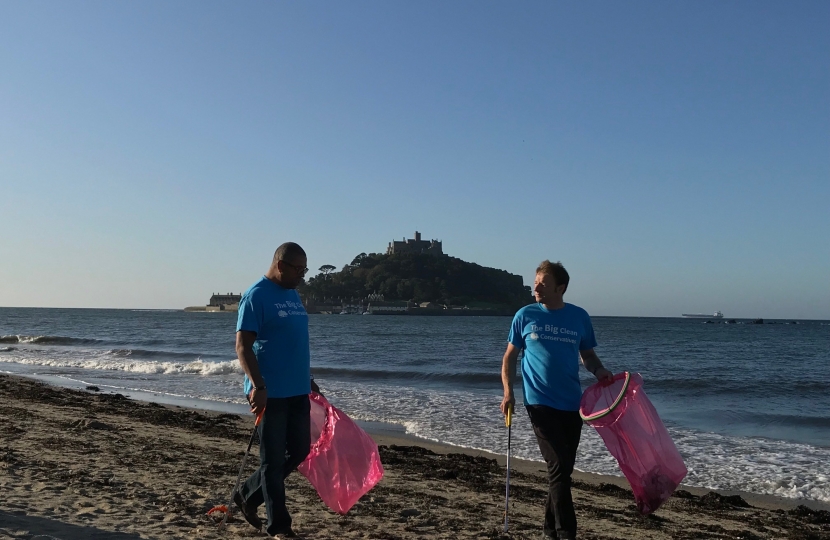 West Cornwall MP Derek Thomas has pledged to do at least two hours of litter-picking as part of the Great British Spring Clean, organised by the environmental charity Keep Britain Tidy.

The campaign, which runs from 28 May – 13 June 2021, calls on the public to pledge to clean up and help the charity achieve a million miles of litter-picking.

This year’s campaign comes as the charity has reported a massive increase in the number of people who have started litter-picking during the various lockdowns and has seen the number of #LitterHeroes grow by a third in less than 12 months.

The Great British Spring Clean, now in its sixth year, brings together individuals, community organisations, businesses and councils to make a difference to the environment on our doorstep and in 2019, more than half a million #LitterHeroes collected just under a million bags of litter, weighing around 4,308 tons.

Mr Thomas, pictured above beach cleaning in 2019 with the then Conservative Party chairman James Cleverly MP, said: “During lockdowns, we have all come to rely on their green space close to home – the local park or beach – as somewhere to escape, exercise and play and what is for our mental and physical health.

“We need to care for these spaces and the Great British Spring Clean is an opportunity for everyone to take a small action that, collectively, can make a big difference.

“Across Cornwall and Scilly picking plastic and litter is now part of a daily or weekly routine for hundreds of people but it is good to join a national effort and I’d urge everyone to make the pledge; just half an hour will help make a difference.”

You can pledge to get involved today at www.keepbritaintidy.org/gbspringclean