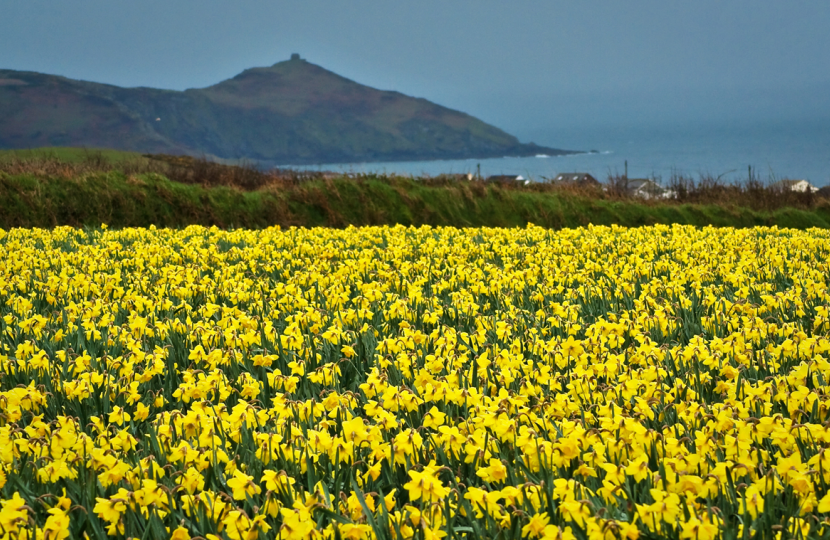 Derek is calling on ministers to expand the scope of the Seasonal Workers Pilot Scheme to support Cornwall’s daffodil farmers.

Cornwall produces 78% of the UK’s daffodils.  The mild climate in the peninsula allows farmers to grow them earlier, and in more abundance, than anywhere else in Britain.  But picking daffodils cannot be mechanised - these are perennial crops, and stems have to be harvested carefully - and this industry relies on seasonal workers.  This year, an NFU survey of growers found that 24% of this year’s daffodils went unharvested as a direct result of labour shortages, even though wages increased by 12% as a result of Brexit.

Historically, seasonal workers have come from abroad to harvest the daffodils.  The Seasonal Agricultural Workers Scheme began in 1945 to address post-war labour shortages - originally intended as a cultural exchange, it gradually became a vital part of our farming workforce.  98% of the workforce came from countries now in the European Union, and the Labour government in 2005 decided to phase out the SAWS and it was closed in 2013, when all restrictions on freedom of movement in the EU were lifted.

Following Brexit, the government announced the Seasonal Workers Pilot.  This gave temporary visas to seasonal workers, but the scheme only covers edible horticulture, because this is where the most significant shortages were reported.  They have always said, however, that the scope is subject to revision in future, and this is where Derek is seeking flexibility from the government.  The reason the government set up a pilot scheme was to gather information for an approach for seasonal labour in 2022 and beyond.  It is clear that the parameters of the scheme as they are now are not working for Cornwall, and Derek is urging the government to extend them.

There is a historic precedent for expanding the rules to include Cornish daffodils.  During World War Two, the transportation of flowers was banned to save resources for the war efforts, but - after receiving a gift of narcissi from the Scilly Isles - Churchill himself made an exception for daffodil production. He said of Cornish growers: “These people must be enabled to grow their flowers and send them to London – they cheer us up so much in these dark days”.

Derek said: “It is in the Government’s interest to rethink the approach to the seasonal workers scheme. The VAT collected on Cornwall’s daffodils alone is estimated at £20m which will be lost if we can’t maintain this important business.

“I’m not asking for more foreign workers, only that they can start their season picking daffodils and then move on to other food crops or other ornamentals. All the government needs to do is to increase the length of the visa and enable greater flexibility so seasonal workers can move more easily from one crop to another.

“The government believes we can ‘grow’ our own workforce which may be the case but only at the expense of other demands such as social care and hospitality.

“We must celebrate the opportunity for people from overseas working in the UK as seasonal workers wherever they live in the world. It enriches our culture and supports our economy.”