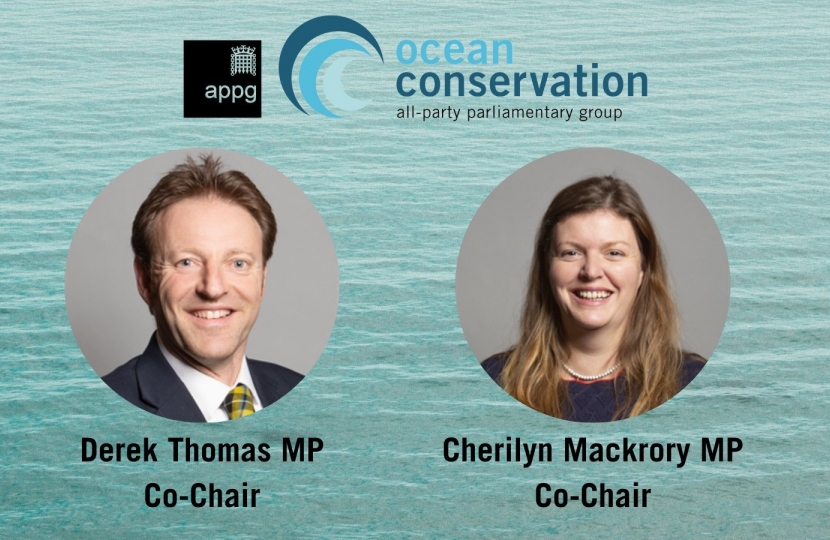 Derek Thomas MP has been elected co-chair of the All-Party Parliamentary Group for Ocean Conservation, along with fellow Cornish MP Cherilyn Mackrory (Truro and Falmouth).  MPs from all the major parties – including the Greens – voted for Derek and Cherilyn to lead the cross-party group’s campaigns.

All-Party Parliamentary Groups are an important part of Parliament, allowing MPs from across the House of Commons to work together on important issues with charities, experts, businesses and other stakeholders.

The Ocean Conservation APPG was formed to discuss, develop and drive solutions to protect and restore the marine environment through policy and legislative change.  It is supported by Surfers Against Sewage, who advise and administer the group, and has already had an impact on protecting the seas around us – by banning single-use plastic across Westminster and championing the bottle deposit return scheme policy.  As water quality climbs up the political agenda – thanks to group members like Derek forcing the government to amend the law on sewage overflows – the Ocean Conservation APPG plans to build on this success.

Derek’s first duty was to chair a meeting of the group to discuss the impact of ocean recovery on our health: participation in water sports has doubled over the last two years, according to Surfers Against Sewage’s report “Thriving Ocean, Thriving People” introduced by SAS’s Hugo Tagholm.  Olympic sailor Hannah Mills gave a keynote speech on the confidence and mental stimulation the ocean gives people.  The APPG also heard from Joe Taylor of the Wave Project, which improves the mental health and wellbeing of young people through surfing, and Dr Jo Garrett (from Exeter University) whose work has shown that living closer to the coast is better for both physical and mental health.

Derek’s next priority is investigating the effects of storm overflows, and hearing from water companies what they are doing to address the problem.

“I look forward to working with my Cornish MP colleague and co-chair Derek Thomas, and MPs from across Parliament to help preserve and protect our oceans and marine environments everywhere for ours and future generations to come."

“The Ocean Conservation APPG, with the support of Surfers Against Sewage, has become the authentic voice of the ocean at Westminster.

“We have already made progress on water quality, plastic pollution and the development of Marine Protected Areas, and I am looking forward to working with Cherilyn to keep healthy seas at the top of the political agenda.”