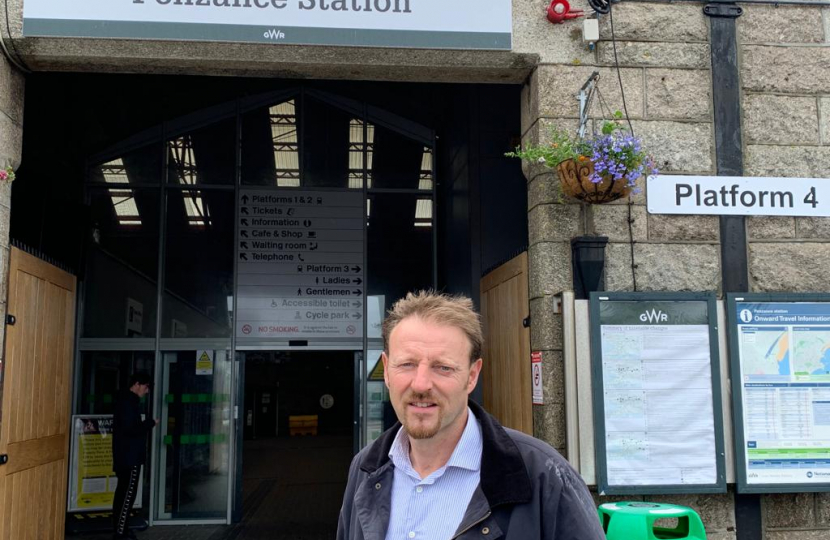 Derek has launched a campaign to save Penzance ticket office – and he needs the help of train passengers from West Cornwall to show how necessary it is.

There are rumours that the ticket office in Penzance railway station is on a list for closure.  The list was drawn up by the RMT union – who have been engaged in a public relations campaign in advance of their disruptive strike action - and is not official.

GWR have stated that there are no plans to close the ticket office in Penzance, and no decision has been made.  They have not, as yet, ruled out closure:

“The pandemic has been an unprecedented financial shock to the railway. While no decisions have been taken over ticket offices, with the acceleration of changing travel patterns and more passengers migrating to digital technology, many jobs will need to change to become more passenger-centric.  Train companies want to work with unions on how to address those changes, while making sure the industry takes no more than its fair share from the taxpayer.”

The statistics show that 86% of train tickets are bought online, but that still means 14% of tickets are bought in-person.   Derek wants to ensure that the people buying those tickets – often older people, or those without access to the internet – are able to get the help and advice they need.

Derek is asking GWR for a guarantee that, even if a physical ticket office is closed, there will be staff permanently to help passengers to plan their journey, find out what ticket they need and purchase it easily.

Derek is running a survey to find out how many people in West Cornwall rely on in-person ticket purchases.  If – as Derek suspects – it is higher than 14%, that will strengthen his case for keeping a ticket office at Penzance.

“I’m not aware of any decision to close Penzance ticket office and I’ve done a lot of digging.

“But we need to make sure GWR know the strength of feeling locally before they make any decisions – we can’t let the threat of passengers being abandoned to their own devices hang over us.

“Whatever decision is made, I’ll work to ensure the excellent staff at Penzance are on hand to assist passengers!”

There is also room on the survey for respondents to mention any other facilities they would like to see retained or returned.  Rail passengers from Penzance sometimes ask Derek about left luggage stores or catering facilities, and this survey is an opportunity to show how widespread these requirements are.

Take part in the survey here