Derek calls for better safety measures for horses and riders 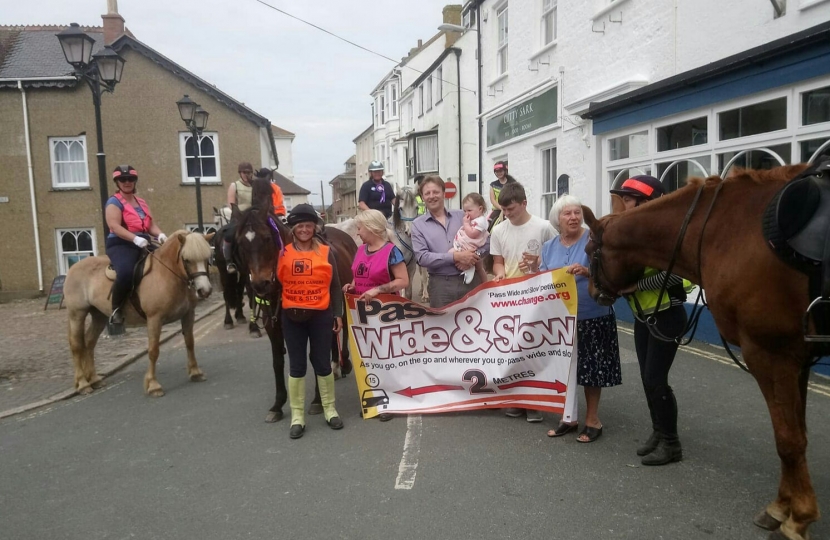 West Cornwall MP Derek Thomas has called for speed limits and minimum distances for motorists when passing horses and their riders to improve safety on Britain’s roads.

In a Westminster debate on traffic offences and sentencing earlier this week which had a particular focus on cyclists and pedestrians, Mr Thomas called for a widening of the debate to include the UK’s ‘forgotten’ horses and riders, saying that 85 per cent of accidents involving horses were caused by vehicles passing too fast or too close to the animals.

British Horse Society (BHS) statistics show that 237 horses and 40 riders have been killed in recent years.

“For a rural constituency like mine in which there are many horse riders that is a wake-up call and the Government should recognise it as such,” he said.

“More needs to be done at Government level to ensure that horses and their riders are a key part of the national debate on road safety.

“Fresh advice and guidance (in the Highway Code) should explain not only why drivers should take extra care and slow down when passing horses but the consequences of passing too close and too fast.”

Mr Thomas also called on the Government to “implement speed limits and minimum distances when drivers are passing horses”.

“I urge the Minister not to overlook the matter of equestrian safety when exploring new road traffic offences and subsequent sentencing. The similarities to cyclists are stark. It therefore makes no sense to turn a blind eye to the matter of horse safety, given the opportunity to improve road safety for vulnerable road users.”

Mr Thomas was originally contacted by a constituent, Debbie Smith, whose online petition about ‘passing ​wide and slow’ and calling for stronger legal protections for riders has now been signed by almost 140,000 people after which he called on the Government to launch a marketing campaign promoting safety measures for horses on rural roads and a reduction in the speed limit from 60mph on single carriageway rural roads; Ministers said that this lobbying had resulted in the Department for Transport doing more to promote road safety.