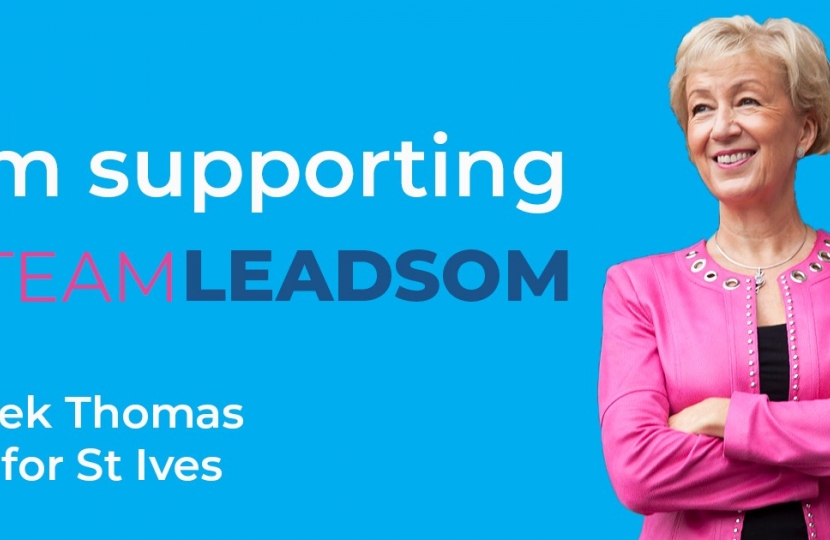 I am supporting Andrea Leadsom to become the next Prime Minister of the United Kingdom. I believe that she has the most coherent strategy for delivering the Brexit people voted for in the best possible time frame, and she has outlined to me personally her commitment to dramatically improve the UK’s role in tackling climate change if she becomes Prime Minister.

Whilst it is clear that the next Prime Minister will be charged with delivering Brexit, I believe that as important as securing a good deal for Britain, is tackling climate change. I have been mindful to hear what those running for PM have to say on this issue, which is why I recently wrote a letter to all Conservative leadership candidates to find out what they planned to do to commit to the fight against climate change and man-made emissions.

I received a number of replies, which can be viewed on the ‘Our Planet Matters’ section of my website, however I felt that Andrea Leadsom most demonstrated her commitment to the green agenda by saying ‘one of [her] first acts as Prime Minister will be to declare a climate emergency and put in place a new cabinet group to drive our ambition to phase out greenhouse gas emissions in the shortest time possible’. I was impressed by the content of her letter and as well as her clear resolve to get on board with fighting against climate change.

I also believe that her plan to deliver a realistic and coherent Brexit, is more robust and well set out than other candidates’, it also makes clear her commitment to transparency and consultation both with MPs, the EU and importantly the general public.  In her ‘Three step plan for Brexit’, Andrea Leadsom states that:

I hope that as the leadership race unfolds that my colleagues in Parliament will see that Andrea Leadsom’s vision for the environment and Brexit stand her apart as the best choice to become the next Prime Minister.

You can read her letter and three step plan below:

Click to view a copy of Andrea Leadsom's response to my letter.

The UK will leave the EU on 31 October 2019, and as Prime Minister I will deliver a Managed Exit. There are three steps I will take to achieve this: