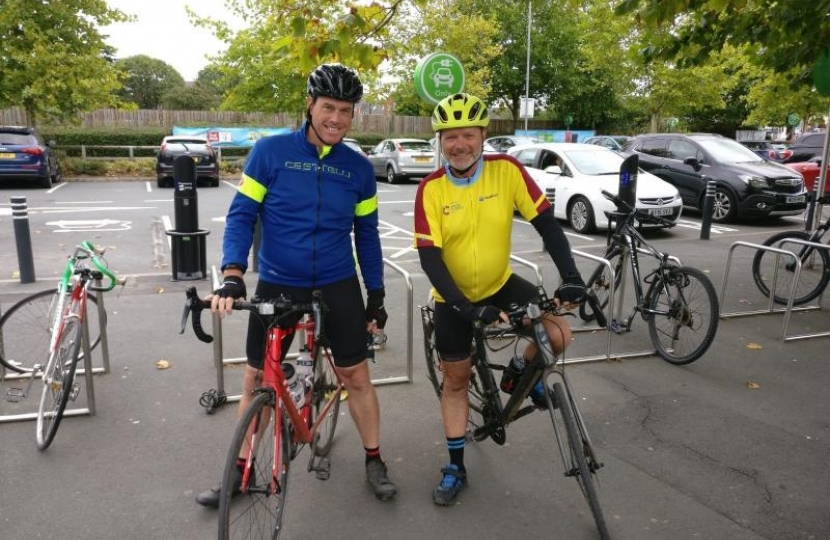 Mark Bayliss, a local constituent and James Van Cleef, his brother-in-law, are fundraising for Cancer Research UK in memory of Adam Van Cleef, James’ son and Mark’s nephew, who they lost to cancer in June 2018. ‘Riding for Adam’ is the title of several cycling events, one completed, and two forthcoming.

They have decided to keep going and now have a new target to raise a whopping £100,000 for Cancer Research UK through further cycling challenges in Spain and the USA to be undertaken later this year and in 2020, and you can discover more of their story on their Cancer Research giving page here.

They have seen how cancer treatment has developed even in the seven years between Adam’s two cancers and although neither are seasoned cyclists, they will keep pedalling to raise funds to combat this devastating disease. Mark and James are looking to gain support from local businesses, promoting brands where appropriate, as well as raising awareness of Cancer Research UK, so please pass their message on if you think you or others can help them reach their target.

It has been inspiring to hear how much these two men have raised for such a good cause. Cancer Research have helped double UK survival rates over the last 40 years and with an ageing population, more than one in three of us will develop cancer at some point in our lives. With continued support, research can deliver breakthroughs that save millions of lives and accelerate our progress toward making all cancers curable.

It's fantastic to see my constituents do so much in support of such a good cause - I'll be wishing Mark and James well as they ride the Camino de Santiago in Spain in September 2019 and Coast to Coast USA in 2020!