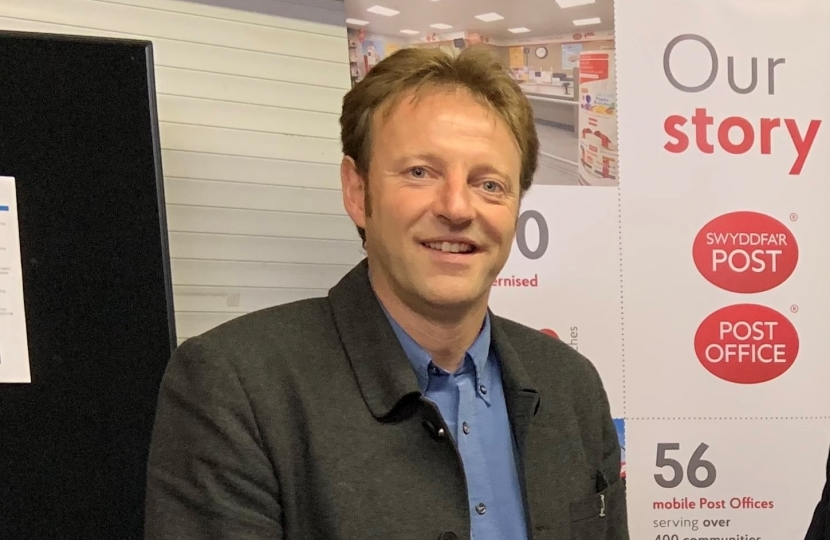 The Prime Minister has pledged a £150 million fund to support community groups who want to buy their local pubs and post offices plus a nine-month ban on the sale of these facilities to other bidders.

Mr Johnson has also announced that a Conservative Government would cut business rates for shops, cinemas and pubs; the average corner shop will get a £1,400 cut in their business rates.

Working with Post Office Ltd, the National Federation of Sub Postmasters and local campaigners, Mr Thomas has led efforts to save West Cornwall’s post offices, a number of which have closed in recent years.

To this end he has supported the introduction of a mobile service to serve those communities where post offices have closed while more permanent services are sought and, in Westminster, argued successfully for postmasters to receive higher charges for handling bank transactions, making their business more viable.

Mr Thomas has also consistently urged Government to completely overhaul the ‘unfair’ system of business rates and welcomed the 2018 budget announcement that rates for businesses with a rateable value of £51,000 or less were being cut by a third.

Mr Thomas said: “I am very encouraged by this announcement - it is vindication for all the work I and my colleagues in Westminster representing rural areas have done.

“In a fast-changing world where so many of us are going online to shop or to access our financial and banking services, it is vital that Government supports our high streets and rural communities, keeping our pubs, post offices and local shops open.

“Boris Johnson’s announcement is a welcome show of support and I hope to be able to build on this if re-elected.”

In further business news it was announced yesterday that a Conservative majority government will implement a package of measures designed to help businesses across the South West make the most of Brexit.

The measures announced yesterday, which will help thousands of the 561,600 businesses in the South West, include:

“Under a Conservative government, the number of businesses in the South West has increased by 147,200 since 2010. Our announcement today will further unleash business potential across the region.

“A Conservative majority government will ensure that businesses can move forward with confidence. We will get Brexit done with the Prime Minister’s fantastic new deal so that we can move on with other priorities – like unleashing the huge potential of British business, supporting enterprise and improving skills.

“The alternative is an anti-business Corbyn-led government propped up by Nicola Sturgeon and the SNP and the chaos and uncertainty of another two referendums.”