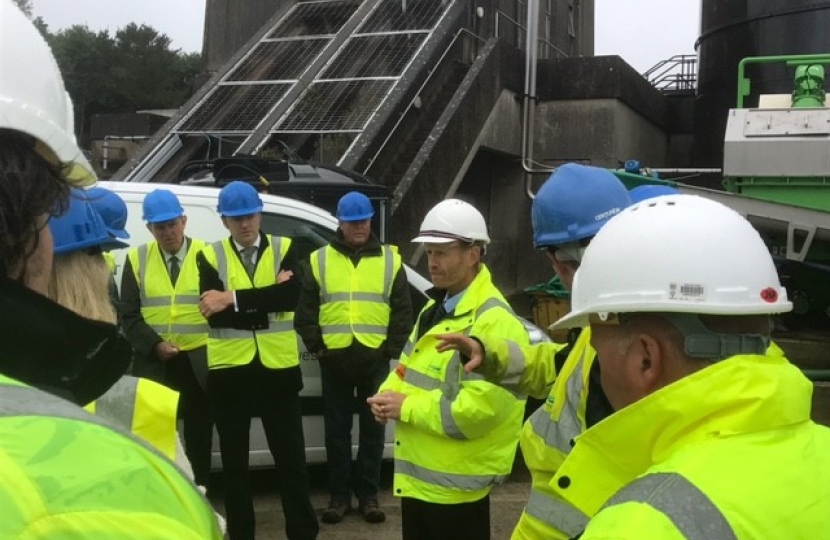 A meeting between St Erth residents, parish councillors and senior staff from South West Water (SWW) at the village’s sewage treatment works has resulted in an action plan being drawn up to address issues about the long-standing ‘pong’ in the village.

The meeting last Friday was arranged by West Cornwall MP Derek Thomas after he was contacted by villagers who have set up a petition demanding action over the continuing stench from the plant – a smell which was particularly bad in the recent spell of warm weather.

Mike Matthews, one of the residents at the meeting, said it had been ‘unbearable’ at times – over the May Bank Holiday his seven-year-old daughter had gone outside and been physically sick.
“The issue of smell from the treatment works has been going on for in excess of 20 years but it’s 2017 now and the time has come for us to say ‘enough is enough’,” he said.

“As residents, we can’t go out into our gardens on nice days or leave our windows open – it’s an embarrassment having people round to the house and the quality of life is miserable.

“In addition, the A30, which runs next to the treatment works, is the gateway to West Cornwall and the smell gives a terrible impression for visitors – what an embarrassment for our tourism industry.”

As well as the smell, the residents also complained about the difficulty in logging complaints with SWW as well as issues around sound and light pollution and the movement of heavy goods vehicles.

During a tour of the plant residents identified a noxious smell coming from one of the older tanks – a tank which is due to be replaced later this year as part of an ongoing £8 million investment programme.

Afterwards an action plan was agreed which included SWW saying they would consult specialists to see if temporary measures could be introduced to prevent the smell coming from the tank identified by residents.

SWW also agreed to take immediate action to improve communication links between the plant and local villagers – by inviting residents on to the odour liaison group and by introducing a texting line which has been successful in other parts of the county; they would also investigate the possibility of installing odour detection equipment around the site.

Mr Thomas said it had been a “very constructive meeting” and the first step towards “restoring trust and dialogue” between SWW and the local community.

“There is no doubt that the residents of St Erth have had to put up with a sickening smell for far too long,” he said.

“If SWW need to install new technology and equipment to deal with the problem, I will do all I can to put pressure on the top management of SWW to ensure that that investment happens but I hope that the action plan put in place on Friday will result in measures that will resolve the problems very speedily.

“There seems to be a spirit of co-operation from both sides and a resolve to find a permanent solution.”

There have been intermittent complaints about the ‘pong’ coming from the Hayle Sewage Treatment Works at St Erth for many years.