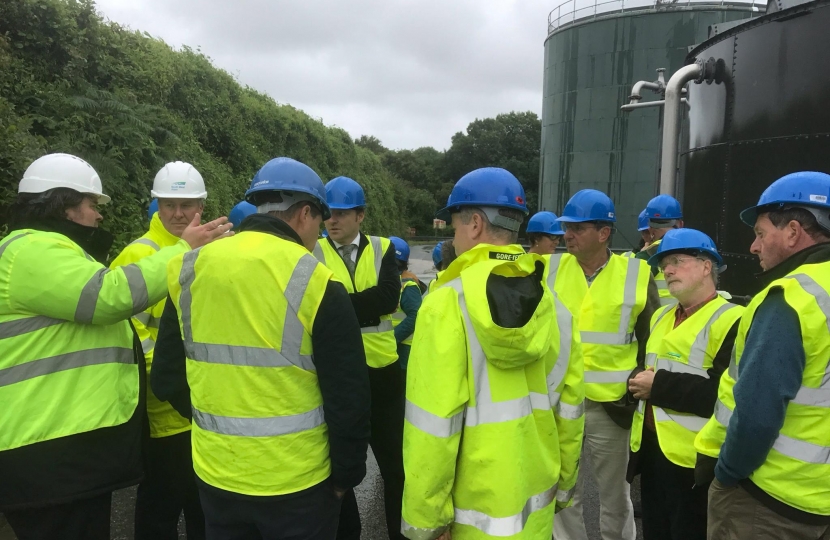 There have been intermittent complaints about the ‘pong’ coming from the Hayle Sewage Treatment Works at St Erth for many years. In recent times, the situation seemed to have improved but in June 2017, Derek was contacted by local residents concerned about the smell and other issues at the plant.

The group toured the site and it was clear that a particularly noxious smell was coming from an ageing tank; other concerns included the difficulty in contacting SWW about odour issues, light pollution at night, early morning noise pollution and the need for camouflage screening where trees had been felled.

Action points to deal with these points were agreed by SWW, including the need to invigorate the Odour Liaison Group which did not work as effectively as other groups in the South West. The ageing tank is due to be replaced in September, 2017.

SWW representatives attend meeting of St Erth Parish Council along with members of the public to give an update on work done since the 30th June meeting.

Following discussions with residents, Derek writes letters to the Environmental Health team at Cornwall Council and to the Environment Agency (EA) to clarify which agency is responsible for odour management at the site.

Meeting of the Odour Liaison Group updates residents and councillors of progress on Action Plan , including trial of a sealed skip to hold waste screenings, the imminent start of testing of new inlet works, the installation of a new door on the storage barn and explanation of the new text system to report odour issues (which is copied in to the EA).

The EA confirms to Derek that it regulates odour management at St Erth Treatment Works and says it has asked SWW to complete a new full site risk assessment to identify sources of odour.

A staff member from Derek’s office attends a meeting of the Odour Liaison Group. An update was given on the trial of the new test reporting system along with a report on remedial works being undertaken.

A staff member from Derek’s office attends a meeting of the Odour Liaison Group. Cledma Bank residents report that the number of occasions when a bad odour has been detected has reduced – although in part this could be due to the cooler, autumnal weather.

Progress was reported with regard to the installation of a Sewage Related Debris (SRD) storage unit, a covered skip on the Start pad to allow screenings to be deposited into a covered area and the likely date (March 2018) of a new Sludge Storage Tank.

Discussions are ongoing between the EA and SWW regarding the production of an effective Odour Management Plan for the plant.

Members of the group were also told about a Think Sink campaign which is being launched in the Hayle area in a bid to reduce the amount of fat and grease that is poured down sinks.

Derek writes letter to Ed Mitchell, Pennon’s director for the environment, asking for details of the progress being made on measures to screen out views of the plant from neighbouring properties.

Derek joins local residents on a tour of the treatment works to see what progress has been made since his initial tour 11 months earlier. Residents report a reduction in the level and frequency of odours coming from the site. New inlet works are operational, the old inlet works are ready for decommissioning, a new sludge tank has been installed and there have been repairs/new equipment installed in several other areas of the site. The introduction of a dedicated text service for a targeted group of 20 local residents to enable them to report odours was discussed.

Dedicated text service is rolled out to 20 local residents, enabling SWW to collect data from a wide range of locations within 1km of the plant, initially for a three-month trial period.

At the quarterly Odour Liaison meetings, attended by a staff member from Derek Thomas's office, SWW inform  local residents that an Odour Control System has been installed in the Sludge Storage Area and that a wall has been constructed in the Star Pad area to prevent flood water mixing with any residual sewer-relate debris. Odour complaints in St Erth rose in the peak summer months of July and august but SWW confirm their determination to deal with odour issues.

Funding has been agreed to install camouflage screening to ensure Cledma Bank residents have a better view of the site; work is due to start on 22nd October.

Following requests from local residents and a letter from Derek Thomas to SWW chief executive, Dr Stephen Bird, SWW agree to continue with the dedicated texting service for 20 local residents.

A report at the first Odour Liaison meeting of the year shows that the number of complaints made about odour from the plant is low - four in November 2018 and none in December.

West Cornwall MP Derek Thomas has welcomed the allocation of an extra £7.5 million of funding for social care in Cornwall.

The money comes from a £650 million boost announced in the autumn budget for local authorities to help deliver services for elderly and vulnerable people.

A meeting between St Erth residents, parish councillors and senior staff from South West Water (SWW) at the village’s sewage treatment works has resulted in an action plan being drawn up to address issues about the long-standing ‘pong’ in the village.

Want to hear more about our ongoing campaigns and news?