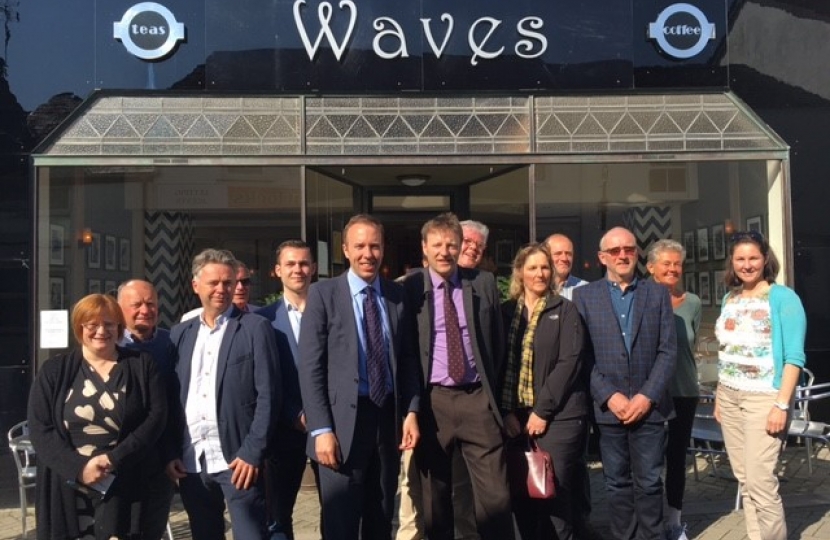 In Derek’s West Cornwall constituency, 87% of businesses are classed as ‘micro businesses’ employing less than 10 employees.

Despite providing the lion’s share of jobs in the area and despite their hard work and commitment, small business owners have, in recent years, faced a number of challenges which make running their business a challenge. These include rising operational costs, increasing red tape and the difficulty of attracting credit.

Derek meets regularly with small business owners and regularly lobbies on their behalf in Westminster. One of the issues he has been most associated with has been to try to ensure that business owners, particularly in St Ives, have not been overly disadvantaged by the publication of the new rateable values by the Valuation Office Agency.

Derek continues to argue that the UK’s imminent departure from the EU offers the Government an ideal opportunity to reform what he sees as an out-dated and unfair Business Rate system.

Meets traders from Penzance’s Lower Quarter to hear their concerns.

Visits retailers in Helston as part of Small Business Saturday.

He said that lifting the threshold to £120,000 would have a beneficial impact.

“It’s clear that there is an economic vacuum created during off-season periods in areas which are heavily dependent on tourism such as in West Cornwall and the Isles of Scilly ,” he said.

“Small businesses often reduce their economic activity in order to remain within the current threshold which not only compresses the tourist season into a few short months but also has a negative impact on employment opportunities for workers and reduces the tax the Government can collect through PAYE.

“Raising the tax threshold will create an incentive for tourism small businesses to open for longer periods each year, put more money into the local economy and invigorate rural high streets.”

Hosts business breakfast at the Queens Hotel, Penzance. Mark Harper, MP for the Forest of Dean and the leader of the South West Conservative MPs’ group, answers questions from more than a dozen local business leaders on a variety  of topics including Brexit and business rates.

Derek writes to all the small businesses in St Ives asking them for details about the rent they were paying and to see if they wanted assistance.

He follows this up by challenging each individual case and requesting that the Valuation Office Agency undertakes a revaluation of the whole of St Ives.

Derek hosts meeting of members of the Cornwall FSB in his Penzance constituency office. Business rates was a major topic of discussion.

The Prime Minister also agreed to discuss small businesses with Derek when she visited Cornwall in May.

Derek joins with the FSB to urge business owners who rely on staff from a migrant workforce to provide important evidence ahead of proposed future legislation.

“The government has commissioned the Migration Advisory Committee (MAC) to advise on the economic and social impacts of the UK’s exit from the European Union and how the UK’s immigration system should be aligned with a modern industrial strategy.

“Many business owners will be concerned that new red tape will make it harder and more expensive to get the skilled workers that they need post Brexit,” he said.

“I encourage all business owners to make their concerns known to the Migration Advisory Committee as soon as possible.”

Leading a debate in the House of Commons, Derek highlights three key areas – Business Rates, the VAT threshold and the introduction of quarterly digital tax reporting - which he believes require reform.

“I believe that the Government needs to scrap the system of business rates and develop a fresh solution, injecting fairness into the tax system for small businesses and taking into account the growth of online shopping and supermarket home delivery services,” he said.

“Structurally there are many things wrong with business rates. The tax bears little or no relation to underlying profits and the way it is calculated is arbitrary.”

He also called for the current VAT threshold of £85,000 to be raised, possibly to £120,000 and urged the Government to “proceed with great caution” toward its stated aim of having a fully digital tax system by 2020.

Responding to Derek’s speech, Mel Stride, Financial Secretary to the Treasury, said there were arguments both for and against the idea of raising the VAT threshold and so he had asked the Office of Tax Simplification to consider the registration threshold as part of its current review of VAT.

Regarding  progress towards the Government’s target of having a fully digital tax system by 2020, Mr Stride also recognised that there was “concern about the scale and pace of change”.

The Treasury had made the decision that businesses will not now be required to join Making Tax Digital until April 2019, and then only to meet their VAT obligations while businesses with turnover below the VAT threshold will be able to choose whether to take ​part.

Office of Tax Simplification publishes its review of VAT.

Its first recommendation is that: “The government should examine the current approach to the level and design of the VAT registration threshold, with a view to setting out a future direction of travel for the threshold, including consideration of the potential benefits of a smoothing mechanism.”

Derek broadly welcomes Chancellor Phil Hammond’s Spring Statement and, in particular, is his announcement of a consultation on the VAT threshold following three years of lobbying for changes to the system.

He is also pleased that Mr Hammond has brought forward the next Business Rates Revaluation by a year to 2021 to ensure more accurate bills but still maintains that the tax should be completely overhauled.

Derek holds a “very positive” meeting with more than a dozen business owners from the Helston area to discuss the future of the town. He was able to update them on the meeting he had with Treasury Minister Mel Stride and there was general support for a business forum so that they businesses are able to speak with one voice - Derek said he would do all he could to facilitate this and work towards ensuring a vibrant and prosperous town centre.

Twice in a matter of days in Parliamentary debates, Derek presses the Government on the need for a reform of business rates.

He said that the current system reflected a business building rather than the business itself, causing significant harm to the high street and made three “urgent requests” of the Government: to halt the increases above the consumer prices index that businesses are facing; for measures to allow town councils to retain 1% or 2% of the business rates collected in their area to support the high streets  and a commitment to scrap business rates altogether – perhaps with a transaction tax replacing it.

In a second debate a few days later, Derek highlighted the issue of holiday let ownership. Treasury Minster Mel Stride responded said he would meet him to discuss issues about holiday lets and also listen to individual cases of businesses paying differing amounts of business rates.

First meeting of the West Cornwall Jobs and Growth group, formed by Derek with the help of Emily Kent, Cornwall Council's Head of Economy, Skills and Culture, is attended by  Liz Truss MP, Chief Secretary to the Treasury. The group seeks ways in which West Cornwall can bring prosperity to areas of deprivation through Government investment.

Derek attends the launch of the Great South West Proposition campaign seeking greater support for the South West economy from the Government.

MPs from all parties together with business, Local Enterprise Partnerships, universities and other stakeholders came together for the launch of the Proposition which has three key ‘asks’ for the Government.

The proposition calls for:

Derek welcomes the Chancellor’s Budget announcement of a significant cut in business rates which he feels could help keep struggling shops and pubs afloat but argues that more needs to be done.

In his Budget statement, The Chancellor, Philip Hammond MP, said that for the next two years, until the next revaluation of business rates in 2021, retailers with a rateable value of £51,000 or less will see their business rates bill cut by a third.

It is estimated that this will result in a saving of up to £8,000 for up to 90% of all independent shops, pubs, restaurants and cafes. Mr Hammond also announced a £675m High Streets Fund will support councils in drawing up plans for the transformation of high streets, to invest in improvements to redevelop under-used retail and commercial areas.

Derek urges West Cornwall’s café and restaurant owners to take part in a Government consultation which he believes could have a significant effect on their business - as part of its childhood obesity strategy, the Department of Health wants to make it a legal requirement for restaurants, cafes and takeaway outlets to print the number of calories of dishes on their menus. Some big chains like McDonalds and Wetherspoons already print the calories of dishes on their menus but Derek says that this move will place an unnecessary burden on small business owners and lead to job cuts.

I am continuing to campaign on business taxes, which affect the businesses in our communities.

After more than six months of negotiations, the Isles of Scilly Steamship Group has announced the successful completion of the sale of Penzance Dry Dock to Penzance-based engineering business Linked Solutions SW Limited.

Derek Thomas has teamed up with a fellow West Country MP to call for Ministers to approve a catch and release fishery for bluefin tuna to help boost the recovery of seaside communities.

West Cornwall MP Derek Thomas welcomed the Tourism Minister Nigel Huddleston MP for a walkabout around St Ives to discuss how businesses have fared since lockdown restrictions were lifted in early July – and the prospects for the next few months.

The focus is on a healthy green balanced recovery and what better example of this than the news that West Cornwall fishing has secured £220,000 to help projects that increase the sale and consumption of locally caught fish.

The Prime Minister’s ‘New Deal’ for Britain: Additional investment to level up Penzance and St Ives

Government to kickstart the economic recovery from coronavirus with £5 billion of infrastructure projects.

101 places to receive at least an additional £500,000 to spend on projects such as improvements to parks, high streets or transport links, including Penzance and St Ives