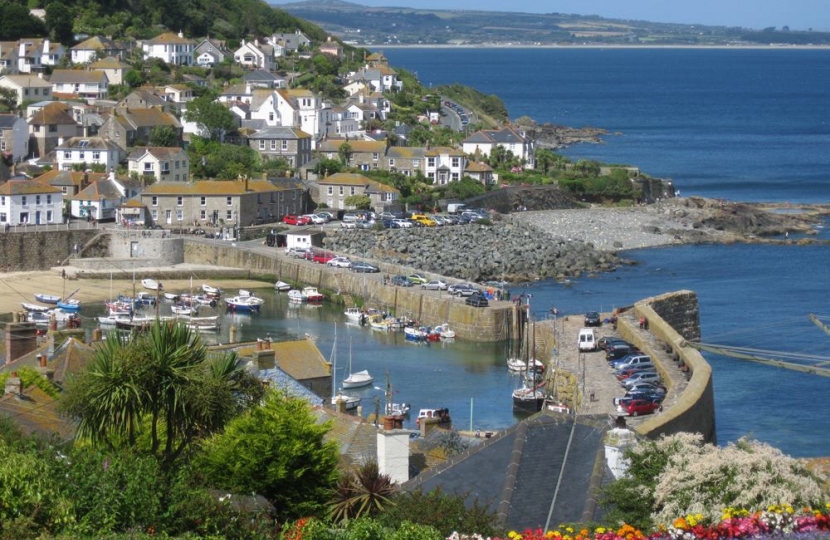 In the week before the Whitsun Bank Holiday at the end of May 2018, a leak occurred in the waste water pipework underneath the car park next to the Coastguard Hotel in Mousehole.

Local Cornwall councillor Roger Harding, who has concerns about the whole waste water and sewage infrastructure in Mousehole, contacted Derek to seek his help in ensuring that remedial work is carried out as soon as possible.

24 May, 2018: Initial leak, in the car park next to the Coastguard is discovered;  tankers are required 24 hours a day to transport sewage from Mousehole to the Chyandour pumping station in Penzance while a temporary, overland pipe is put in place.

Between the end of May and the end of the year, three further leaks occur in a 510 metre stretch of pipework.

24 July, 2018: The Government announce a £1.4 million grant to reduce flooding in the Mousehole area. The total includes £680,000 of funding to enable the Environment Agency to investigate the best options for the area. The announcement also helps unlock an additional £724,000 to invest in flood risk management.

6 August, 2018: Derek hosts a meeting with representatives from SWW , the Environment Agency and local residents to discuss the importance of a) immediate waste water pipe repairs and b) wider infrastructure issue which have caused historic flooding in Mousehole and sewage leaks into the harbour.

Regarding the sewage pipe leaks on the rising main, SWW report that the pipe was worn out from inside due to constant scouring by sand and grit which required major refurbishment. As a result, a temporary over-lander pipe was run around the coast to keep the village going through the summer months; further work was required to identify the best way to tackle the problems.

It was agreed that Derek would make contact with SWW and the EA for a progress update by the end of September.

22 October, 2018: Derek sends a letter to Mousehole residents, giving them an update on work being carried out by SWW and the EA. SWW report that their engineering department is drawing up a permanent solution to the problem of the leaks in the rising main.

4 December, 2018: A second meeting is held at the Coastguard when SWW outlines provisional plans for the installation of new, underground pipework, the work to take place in early 2019.

7 January, 2019: Derek writes letter to the EA, urging them to monitor sea water quality in Mousehole harbour following frequent sewage leaks from the sewage holding tank in the harbour.

23 January, 2019: The Environment Agency reply to Derek's letter - since the failure of the rising main, the EA has logged several minor sewage pollution events but have not recorded any significant pollution being caused. On an inspection on 19 December, there was no sign of sewage leaking either from the bypass of the rising main or from the pump station in the harbour. The EA says it cannot monitor the quality of water in the harbour as it is not a designated bathing water area.

April 2019: SWW and their contractors, Glanville Environmental, recently completed work to replace a 510-metre length of rising main in the village. Work outstanding includes checking the condition of the gravity sewer line and repairs to the pipe work within the Sewer Pumping Station Wet Well.

12th July, 2019: Derek meets with representatives of the Environment Agency to discuss £1.4 million scheme to reduce flooding in the Mousehole area.

1st August, 2019: A Flood Risk Management Drop In Event takes place at Mousehole's Solomon Browne Memorial Hall detailing plans on how flood risk can be managed in the future.

10th January, 2020: DFT writes to the Environment Agency regarding the Mousehole flood management scheme and the ongoing issues of sewage overflows in the village.

28th February, 2020: DT writes to David Robertson, Director at the Pennon Group which includes SWW, highlighting ongoing issues in the village, firstly, from frequent sewage leaks from the holding tank in the harbour and from manhole covers and secondly, from the real risk of flooding in the village.

June, 2020: SWW write to Mousehole resident saying that they carried out a dye test in which confirmed that there are defects in the sewer pipe at the south end of the harbour by the fishermen's steps. Water quality is typically good but during wet weather, it may be affected. The Harbour Commissioners are placing public advisory signage around the harbour to ensure users of the harbour are aware of this and SWW are developing a plan to replace the damaged pipe.

Mousehole residents will know that SWW and their contractors, Glanville Environmental, recently completed work to replace a 510-metre length of rising main in the village.