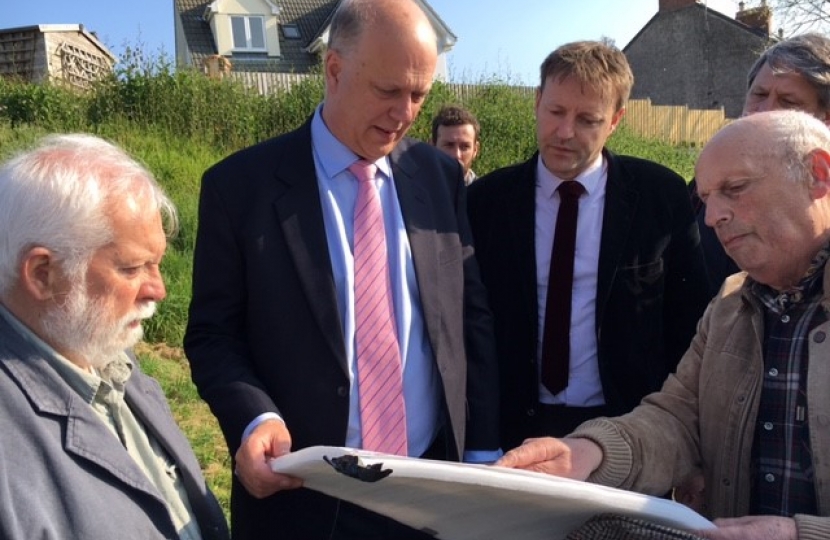 The stretch of A30 from Newtown roundabout to St Erth has long been a cause of concern – there are tailbacks and queues along the road at all times of the year and local traffic finds it very difficult trying to turn out on to the road from both the Ludgvan and Rospeath industrial estate roads at the Crowlas crossroads.

In addition, there are regular accidents along the road, a number of them resulting in fatalities, and the quality of life, not just for residents in Crowlas but also in Cockwells, Whitecross, Rose-an-Grouse and Canonstown, is severely diminished by the constant stream of traffic.

This stretch of the A30 is the only one along the A30 from Exeter to Penzance where the road passes through villages and hamlets and congestion is estimated to cost the local economy more than £3 million a year.

A fully worked-up scheme to bypass this stretch of road was approved more than 20 years ago but shelved in 1997.

Derek hosts a meeting with members of the newly-formed Crowlas Bypass Now Group and a reporter from The Cornishman. The group members outlined their aspirations and explained that they wanted to encourage people to make comments for the Road Investment Strategy 2 (RIS2) consultation.

Thanks to publicity generated from this meeting, hundreds of comments were posted on the interactive map on the Highways England website and many others were delivered to Derek’s office which were submitted to Highways England by the 28th July deadline.

Derek hosts meeting with Highways England representative about the RIS consultation and also about immediate safety work along the existing road.

Charlie Cartwright, from the Crowlas Bypass Now group updates local stakeholders at a forum meeting organised by Derek designed to give different groups an overview of what is happening in the Mount’s Bay area.

After receiving information from Highways England that agreed short-to-medium term road safety work along the A30 from Crowlas to St Erth may not take place until 2020-21, Derek writes to Transport Minister John Hayes asking him to press Highways England to ensure this work remains at the top of their agenda; letter also written to the chief executive of highways England.

Derek organises meeting at the Star Inn, Crowlas to meet villagers and discuss A30 traffic issues.

Following four accidents along this stretch of the A30 since the turn of the year, Derek again presses Highways England for immediate road safety work to be undertaken.

Derek hosts meeting in his Penzance constituency office with campaigners to discuss the possibility of a bypass.

Highways England write to Derek saying that estimated cost of safety improvement works on the A30 is £1.613 million.

Derek praises the work of the Crowlas Bypass Now group as Highways England names the Penzance to Camborne stretch of the A30 as one 11 lengths of the South West’s strategic road network which is now being considered ahead of the announcement in 2018 of the Road Investment Strategy 2 for 2020-2025.

More than 60 people gathered at the Lamb & Flag in Canonstown to hear Derek and Joe Poynton and Charlie Cartwright, from the Crowlas By Pass group, give an update on future plans for the A30.

Derek welcomes Transport Secretary Chris Grayling to meet campaigners, residents and local businesses and to see for himself the issues at the Crowlas crossroads. The Minister said he could see no reason why the safety work could not be done soon and would check with Highways England what the problem was.

Staff from Derek’s office attend meeting of Crowlas Bypass Now group to discuss formal adoption of a constitution; agreed that Derek’s office would produce a petition canvassing support for a bypass and for an immediate start to interim safety improvement works.

Members of Crowlas Bypass now attend a Highways England meeting for stakeholders to learn more about the Road Improvement Strategy. Joe Poynton reports that HE officers were impressed with the strength of support for a bypass.

Derek visits Crowlas to collect signatures for A30 petition.

Derek attends a Department for Transport briefing on RIS2 in Westminster.

Derek hosts meeting with CC Highways, Cornwall councillor Simon Elliott and members of the Crowlas Bypass Now group when the importance of Cornwall Council backing the bypass plan ahead of other transport projects was stressed.

At a meeting of roads’ campaigners and local stakeholders organised by Derek Thomas, there was a unanimous feeling that a new road bypassing Crowlas should be included in the Road Investment Strategy 2 (RIS2) for major roads’ projects.

Geoff Brown, Cornwall Council’s portfolio holder for Transport, was able to confirm that improvement to the A30 west of Camborne was a key priority for the council.

“We have three clear priorities,” he told the meeting.

“Our most pressing priority is the A30 dualling work from Chiverton to Carland Cross but behind that, of equal importance to Cornwall Council are the upgrades of the A30 west of Camborne and the A38 from Plymouth to Bodmin.”

Derek Thomas attends a meeting hosted Ludgvan's Cornwall councillor Simon Elliott and the Rev Nigel Marns, giving villagers the opportunity to speak out about the traffic issues affecting them - these included HGVs (mainly but not exclusively) travelling through Ludgvan to and from Castle-an-Dinas quarry and parking in the vicinity of the school.

Derek travels to Bristol to meet Rebecca Edmond, Highways England's Head of Planning & Development; on the agenda: a) Urgent safety measures along Crowlas/Cockwells; b) A30 dual carriageway from Camborne through to Penzance - next steps and what is lacking?

Derek hosts a meeting to discuss progress on both the interim safety works through Crowlas and the potential project to dual the A30 from Camborne to Penzance. Re the interim safety works, and particularly the crossroads in Crowlas, Ed Halford, from Highways England, plans to pull together a small working party to consider traffic issues in the wider Crowlas-Ludgvan area, not just along the A30. Re RIS2 and the dualling project, the meeting discusses the value of commissioning a report similar to the £40,000 'Case for the A38' produced in East Cornwall. Ed Halford says that, thanks to the work of local roads campaigners and Derek Thomas, this work has already been done in the west of the county. Derek suggests producing  a report focusing on 'extra' benefits such a road would bring aside from the expected economic boost and easing of traffic congestion; these could include environmental, health and wellbeing.

Derek  meets in Crowlas with local stakeholders, representatives from Highways England, Cornwall Council and from Jacobs Ltd (transport design consultants) to discuss the situation in Crowlas; Derek agrees to organise a workshop meeting and a survey canvassing the views of local residents.

Result of Derek's survey into traffic issues on St Erth to Newtown roundabout stretch of A30 are sent to Highways England and Jacons Ltd. Many of the 90 responses indicate that average speed cameras would help resolve speeding issues on the road.

Derek writes to Rebecca Edmond, Highways England's Head of Planning & Development, reminding her of the meeting held a year earlier and the need for action on a) Urgent safety measures along Crowlas/Cockwells and b) A30 dual carriageway from Camborne through to Penzance.

Derek asks a parliamentary question and secures meeting with new Secretary of State for Transport and Roads Minister to discuss A30 road improvements. To watch click here.

Update on A30 progress

The Crowlas Bypass Now group (Joe Poynton & Charlie Cartwright) is now on Highways England’s stakeholder list as it considers potential schemes for RIS2 and the group is invited to different HE events.

The group has submitted a dossier of evidence to HE on why the road should be bypassed which includes a united statement of support for the scheme from West Cornwall councils; HE are likely to publish a broad brush policy statement about what sort of schemes they are looking for early in the new year before making a final decision on what schemes should go forward, possibly in 2019.

The group note that while many people living along the road say they want a bypass in order to get their lives back, HE’s priorities are different – economic benefits and solving bottlenecks.

Just a few short months away from daffodil-picking time and the Home Secretary has still not confirmed that the Seasonal Agriculture Workers Scheme (SAWS) will be extended to include daffodils and other ornamentals.

Since first elected in 2015 I have been leading a small eclectic mix of local residents who are determined that improvements are made to the A30 west of Camborne and in particular from St Erth through to Newtown Roundabout.

The National Trust is one of the largest landowners in West Cornwall, owning 40% of the Cornish coastline.  It was founded to protect land property of natural beauty or historic interest - or both, in the case of places like Levant Mine.

After a difficult virtual meeting with Highways England and Cornwall Council officers we have finally got traction to step up safety work on the A30 to commence from next month. This includes an extension to the 30mph limit and improvements to the road surface, markings and signage.

This Parliament is unique in that it is able to debate and pass legislation paving the way for trading agreements around the world - something the UK Parliament has not been able to do for decades.

MP Derek Thomas says he is encouraged that a ‘united effort’ is underway to ensure that West Cornwall enjoys improved road links despite recent disappointments.

Really pleased to have secured a meeting with the new Secretary of State for Transport and the Roads Minister this morning after raising again the need for urgent road improvements along the A30.

MP Derek Thomas hopes that the announcement of a £27 million pound boost for cycling, heritage and wildlife projects along the A30 in Mid-Cornwall will pave the way for further, similar investment in the west of the county.

MP Derek Thomas said the visit of Transport Secretary Chris Grayling to his West Cornwall constituency gave him a welcome opportunity to drum home the need for road improvements and a new A30 bypass between Long Rock and St Erth.